Amr Moussa, the secretary-general of the Arab League, has called for a no-fly zone over Libya, and has said the bloc wants a role in imposing it.

His comments come as members of the organisation meet in the Egyptian capital Cairo for talks on the ongoing crisis.

“I do not know how nor who will impose this zone, that remains to be seen. The Arab League can also play a role, that is what I will recommend,” Moussa said on Saturday in an interview with a German magazine.

“I am talking about a humanitarian action. It consists, with a no-fly zone, of supporting the Libyan people in their fight for freedom against a regime that is more and more disdainful.”

Support from the West for a no-fly zone appears to hinge on the outcome of the meeting as consensus is sought for such an action.

Robert Gates, the US defence secretary, said on Saturday that it remains unclear whether imposing a no-fly zone over Libya would be a “wise” move.

“This is not a question of whether we or our allies can do this. We can do it,” Gates said.

“The question is whether it’s a wise thing to do and that’s the discussion that’s going on at a political level.”

Al Jazeera’s James Bays reported from Cairo that there are two key topics that will be on the table at the meeting: the no-fly zone and the league’s diplomatic relationship with Libya.

“We know that Saudi Arabia and the Gulf Co-operation Council countries have said they support the idea of a no-fly zone.

“The dynamic of the league have changed in the last month or so,” he said, noting Egypt and Tunisia’s diminished influence that has come as a result of political flux in both countries.

Catherine Ashton, the EU’s foreign policy chief, will be in Cairo on Sunday to discuss the situation with Arab leaders.

Arab inaction on the Libyan crisis could lead to “unwanted foreign intervention” and fighting among Libyans, the foreign minister of Oman warned on Saturday.

“If the Arab League does not take responsibility to prevent a downward spiral, that could lead to internal fighting or
unwanted foreign intervention,” Youssef bin Alawi bin Abdullah said in his opening remarks at the meeting.

“The Libyan crisis poses a threat to the stability of Arab states,” he added.

Al Jazeera’s Anita McNaught, reporting from the Libyan capital, Tripoli, said there had been no response on the prospect of foreign intervention. She said that the Libyan opposition’s calls for foreign intervention are not enough, and the EU, the US and NATO are waiting for a clear legal mandate and regional support.

“Will they get regional support in Cairo?” she said.

“Amr Moussa [the body’s head] may be supportive but it’s unlikely the Arab League will speak with one voice on this.”

“The European Union and the [UN] Security Council are not going to do anything unless they get support from the Arab League,” Qatar University’s Youcef Bouandel told Al Jazeera.

The Gulf Co-operation Council (GCC) has also backed the measure to impose a no-fly zone and has said the regime of Muammar Gaddafi is illegitimate.

In terms of which organisation might be in charge of a no-fly zone, Moussa said: “That depends on the decision of the (UN) Security Council. The United Nations, the Arab League, the African Union, the Europeans – everyone should
participate.”

Moussa added that Gaddafi was showing a lack of the “awareness that presidents [Zine El Abidine] Ben Ali in Tunisia and [Egypt’s] Hosni Mubarak demonstrated by resigning”.

He said he believed in a “domino effect” in revolts in the Arab world and said he expected other autocratic regimes to fall.

“This is only the beginning,” he said, noting that the situation in Yemen in particular was “extremely tense. The region is on the verge of changing radically in a very short time.

“What we are seeing is the discovery of true democracy by the Arab world. It’s a unique chance.”

On Friday, Barack Obama, the US president, said the United States and its allies were “tightening the noose” around Gaddafi and European Union leaders meeting in Brussels said they would consider all options to force the Libyan leader to step down.

However, the 27 leaders meeting in Brussels stopped short of endorsing air strikes, a no-fly zone or other military-backed means to achieve that goal. Libyan rebels said their three-week-old insurrection could fail without a no-fly zone.

The summit sidestepped a British and French initiative for a UN Security Council resolution that would authorise a no-fly zone.

NATO has released pictures of another spy plane about to begin monitoring Libya’s skies, as it continues its surveillance of Libyan airspace.

Meanwhile, the leaders of South Africa, Uganda, Mauritania, the DRC and Mali will form a panel that will travel to Libya shortly to help end the violence there, the African Union announced on Friday.

“The ad hoc committee was set up … to engage with all parties in Libya, facilitate in an inclusive dialogue among
them, and engage AU partners … for the speedy resolution of the crisis in Libya,” the bloc said.

At a meeting of heads of states on Thursday, Ramtane Lamamra, the head of the AU’s Peace and Security Council, said events in the North African country needed “urgent African action” to bring about an end to the hostilities.

The AU has rejected foreign military intervention in Libya, where forces loyal to Gaddafi are battling with rebels seeking to end his almost 42-year-old rule. 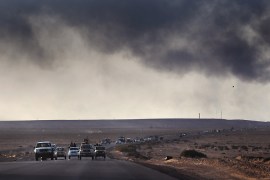 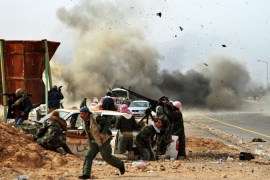 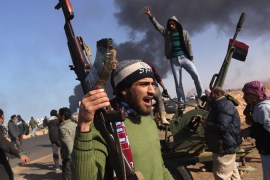