Radiation has leaked from a Japanese nuclear reactor and authorities say there is a possibility of a meltdown at a plant about 250km north of the capital, Tokyo.

But the government insisted on Saturday that radiation levels have reduced since pressure built rapidly last night near the Fukushima Daiichi nuclear plant, where five reactors were earlier under a state of emergency.

The cooling system of the plant was damaged in the massive earthquake that struck northeastern Japan and triggered a tsunami, killing hundreds of people.

An explosion at the nuclear facility tore down the walls of one building on Saturday, leaving smoke billowing out. But authorities said the explosion did not affect the reactor core container.

“We are now trying to analyse what is behind the explosion,” Yukio Edano, a government spokesman, said. “We ask everyone to take action to secure safety.

He added that engineers planned to fill the reactor container with sea water to cool the fuel rods and avert a melt down, after parts of the No.1 reactor’s fuel were exposed.

Television channels warned nearby residents to stay indoors, turn off air-conditioners and not to drink tap water. People going outside were also told to avoid exposing their skin and to cover their faces with masks and wet towels.

Peter Hayes, the executive director of the Nautilus Institute for Security and Sustainable development in Melbourne, described the situation as “dire”.

“It’s still possible that the reactor workers can stabilise the situation if power is brought back, if coolant is brought into the reactor,” he told Al Jazeera, but warned that “we’re really right at the precipice of a massive nuclear crisis”.

Steam containing low-level radiation has been released to relieve pressure and tens of thousands of residents have been evacuated from surrounding areas near the two sites in Fukushima.

Radiation 1,000 times above normal was detected in the control room of one plant in the early hours of the morning.

The quake, which measured 8.9 on the Richter scale, cut the supply of off-site power to the plant and diesel generators intended to provide back-up electricity to the cooling system.

“The events that occurred at these plants, which is the loss of both offsite power and onsite power, is one of the rarest events to happen in a nuclear power plant, and all indications are that the Japanese do not have the situation under control,” said Edwin Lyman, a nuclear expert at the Union of Concerned Scientists, a US-based nonprofit organisation.

However, Naoto Sekimura, a professor at the University of Tokyo, said a major radioactive disaster was unlikely.

“No Chernobyl is possible at a light water reactor. Loss of coolant means a temperature rise, but it also will stop the
reaction,” he said.

“Even in the worst-case scenario, that would mean some radioactive leakage and equipment damage, but not an explosion. If venting is done carefully, there will be little leakage. Certainly not beyond the 3 km radius.”

Prime Minister Naoto Kan said securing the nuclear plants was Japan’s top priority. Early on Saturday morning, he left on a helicopter ride to Fukushima to assess the situation at the plants operated by Tokyo Electric Power, and in other areas in the disaster zone.

When Friday’s quake hit, the plants immediately shut down, along with others in quake-hit parts of Japan, as they are designed to do – but cooling systems at some reactors failed, the government said.

When reactors shut down, cooling systems must kick in to bring down the very high temperatures. This is key to prevent a “nuclear meltdown” and radioactive release. Japan’s network of advanced nuclear power plants are designed to shut down as soon as the earth shakes.

The quake was one of the strongest ever recorded and triggered a devastating tsunami, up to 10-metre-high along parts of the country’s northeastern coastline.

Media reports estimate at least 1,300 people may have been killed, most of whom appeared to have drowned by churning waters.

“The damage is so enormous that it will take us much time to gather data,” an official at the national police agency said.

The Japanese army has deployed about 50,000 troops for search and rescue operations.

A towering wall of water, generated by the quake, pulverised the northeastern city of Sendai, where 200-300 bodies have reportedly been found on the coast.

The wave of black water sent shipping containers, cars and debris crashing through the streets of Sendai and across open farmland, while a tidal wave of debris-littered mud destroyed everything in its path.

The northeastern Japanese city of Kesennuma, with a population of 74,000, was hit by widespread fires and one-third of the city was under water, Jiji news agency said.

More than eight million homes lost power, mobile and landline phone systems broke down for many and gas was cut to more than 300,000 homes, meaning many people could not heat their dark homes during the cold night.

The unfolding natural disaster prompted offers of search and rescue help from 50 countries.

The towering wave set off alerts across the Pacific, sparking evacuations in Hawaii and the US West Coast, and devastating at least one California port.

Chile said it was evacuating coastal areas and Ecuador’s state oil company announced it had suspended crude oil exports due to risks posed by the tsunami.

More than 300 houses were destroyed in the remote city of Ofunato and a dam broke in the northeast prefecture of Fukushima, with homes washed away.

In Tokyo, office workers who were stranded in the city after the quake forced the subway system to close early slept alongside the homeless at one station.

Scores of men in suits lay on newspapers, using their briefcases as pillows. Kyodo said at least 116,000 people in Tokyo had been unable to return home on Friday evening due to transport disruption.

The quake, which lasted about two minutes, rattled buildings in greater Tokyo. It was felt in Beijing, about 2,500 km away.

The first quake struck just under 400km northeast of Tokyo, the US Geological Survey said. It was followed by more than 70 powerful aftershocks, one as strong as 7.1. 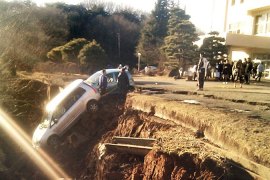 The UN says Japan has requested for limited help in its rescue efforts after the devastating quake and tsunami. 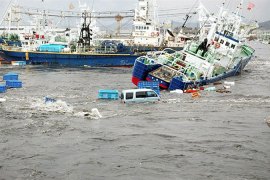 Powerful earthquake that triggered massive tsunami said to be worst in recorded history. 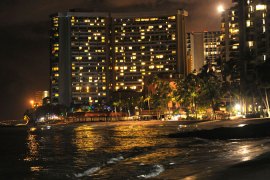 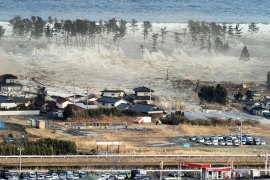