Three weeks after the outbreak of violence in Libya, an impressive rebel advance that liberated most of country’s east with lightning speed has stalled outside the key oil refinery of Ras Lanuf.

Until now, armed but untrained fighters had managed to easily overthrow military garrisons in town after town: first Ajdabiya, then Brega, and finally Ras Lanuf, which no one expected would fall easily.

For weeks, rumours were thicker than Gaddafi’s troops on the road west. The feared Khamis Brigade, a special-forces unit named after one of Gaddafi’s sons, was nowhere to be seen. Lone air force fighters made half-hearted sorties against rebel positions; purposefully or by accident, they never hit their target.

But now, the rebel wave seems to have broken, at least momentarily. Gaddafi troops have halted the opposition’s advance at Bin Jawad, a small town between Ras Lanuf and Sirte, Gaddafi’s reputedly heavily fortified home town.

Exactly how the loyalist troops have countered the rebel advance remains somewhat of a mystery, since journalists rarely witness head-to-head fighting.

On Wednesday, rebels armed with AK-47 assault rifles, truck-mounted machine guns, anti-aircraft batteries and even what appeared to be mobile Grad rocket launchers advanced west of Ras Lanuf but were pushed back in the face of Gaddafi mortar fire.

An Al Jazeera team on the front lines saw only one army mortar team operating in the area, but there were probably more, since a steady rain of shells fell forced rebels to flee back down the road. Still, the regime forces deployed so far along Gaddafi’s eastern front are surprisingly light: There are no tanks, no rockets, no heavily armed battalions of soldiers advancing under heavy machine gun fire.

Meanwhile, the skill of Gaddafi’s air force has seemed to be on the rise. After several days of air strikes near rebel convoys and ammunition depots that yielded only craters in the desert sand, jets on Tuesday and Wednesday hit oil-company residences at Ras Lanuf – they have been mostly abandoned – and storage terminals at Sidra, a nearby port. The latter bombing ignited huge blasts of oil and sent powerful streams of thick, black smoke into the sky.

Rebels are armed with large-calibre anti-aircraft weapons, which they fire in the air with gleeful abandon when any journalist approaches to observe, but they aren’t trained in their use and do not seem able to track Gaddafi’s jets fast enough to hit them. Rebels said they brought down a Libyan jet on Monday, but no news organisation could independently verify the claim.

Then there are the surface-to-air missiles (SAMs). Though rebels have been photographed firing SAMs, which are likely Russian-made, the weapons don’t seem to be in wide or effective use. New York Times writer CJ Chivers has written that experts believe many of the SAMs are old and broken-down. The rebels also keep many of their weapons exposed to the sand and sun, which probably doesn’t help their condition.

“We have enough men, and brave men, but the problem is the weapons. Gaddafi has all the modern weapons, the heavy weapons,” said Salah Younis, a 45-year-old Arabic teacher who was watching convoys of fighters pass through a checkpoint at Ajdabiya toward the front lines recently.

But the rebels’ lack of training might prove more fatal than their limited armory. Frontline fighters have displayed notable bravery and have organised fairly effective supply lines for weapons, food and fuel, but they often flee when presented with serious resistance and seem to have no organised hierarchy, raising the possibility that the recent series of rebel victories was the result more of strategic withdrawals by Gaddafi troops rather than their full-scale rout.

When rebels briefly took Bin Jawad earlier this week, witnesses said they began celebrating prematurely in the town centre and were ambushed by Gaddafi loyalists who had hidden themselves inside houses in the town. Opposition supporters alleged that enemy troops used residents as human shields, but that claim could not be verified. What was clear was that the rebels fled Bin Jawad and have yet to fight their way back.

One man waiting to refill at a petrol station on the east-west road said that “brave” men had come to the front from major eastern cities such as Benghazi and al-Baida but that the fighting had stalled. He worked at the Ras Lanuf refinery, and his family had already fled far away.  He declined to give his name, expressing concern that he still didn’t know which way the “balance of power” would tip.

Another man, Salah Abdelgader, sat outside the Ras Lanuf oil company residences – a spot where rebels have arranged a staging area and checkpoint – and smoked a cigarette as he watched fighters fire their anti-aircraft guns for show. He bemoaned their lack of leadership. If defected army generals did not come to lead them, they were finished, he said.

The outcome may ultimately depend on whether NATO or the Arab League decide to intercede on the rebels’ behalf. The Libyan national opposition council has already called for a no-fly zone, but the United States and most European powers have said they don’t want to establish one without the United Nations’ imprimatur.

Many rebels want foreign powers to go further than that. Several have told Al Jazeera in impromptu roadside interviews that they would be happy if foreign jets conducted limited air strikes in the country, perhaps targeting Gaddafi’s personal residence and command centre in Tripoli, the Bab Aziziya. They say they’d even welcome such attacks by the United States, which bombed Libya 25 years ago.

“Oh, that would be great!” Younis said with a smile.

Many draw a distinction between air strikes and boots on the ground. Nobody wants to see a foreign army, especially US troops, come into Libya; residents raise the spectre of Iraq, saying once the Americans come, they don’t go.

Air strikes, however, might be a necessity. Gaddafi has total superiority in the skies above Ras Lanuf. The well-aimed bombing run that ignited the oil terminals at Sidra on Wednesday was an obvious sign that he can strike when and where he wants. His troops also have had three weeks to prepare their defense of Sirte, and locals’ estimates put the longtime leader’s strength there at around 4,000 men.

There are rumours that pro-Gaddafi troops have been mining the area around Sirte, and the rebels face the likely prospect of again moving forward without much help from their defected army allies.

“The army have some people here to help out, organise, but I don’t think they’re fully participating in this thing,” said Emad Abdulhamied, a 28-year-old economist who was standing near the front lines on Monday.

Abdulhamied earned his master’s degree in finance from Glasgow University in Scotland in 2009. He was on leave from his job in the banking sector – he asked that we not name his employer – when the revolution broke out. Since then, he has tried to help as best as he can, though he has no experience with weapons.

In an attempt to convince Libyans not to aid the uprising, Gaddafi has said that foreign powers want to “colonise” their country, Abdulhamied said. But he still looked favorably on the possibility of US air strikes on the Bab Aziziya.

“That wouldn’t be a terrible idea,” he said.

Around 98 per cent of the population in the east sides with the rebellion, Abdulhamied estimated, and around 80 or 85 per cent in the west. Those that don’t he said, are people who have personally benefitted from Gaddafi’s reign.

“They are willing to fight for the privileges they have,” he said. 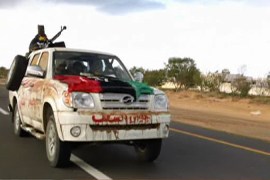 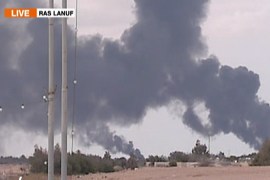 Strategic city of Ras Lanuf comes under heavy shelling by government forces, with reports of deaths and injuries. 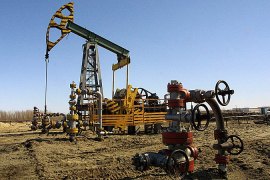 Russia cashes in on oil rise 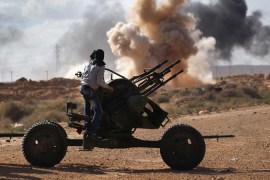