Muammar Gaddafi, Libya’s embattled leader, has once again alleged involvement of foreigners in the rebellion against his more than 41-year-old rule.

In an address on State TV , Gaddafi warned of a plot to colonise Libya. As proof, he said his security forces had captured several foreigners during a raid on Monday.

He alleged “foreign forces” were recruiting vulnerable youngsters in Zentain, Az Zawiyah and Benghazi – cities currently being held by rebels ranged against him.

“Those who exhibit weakness are targeted … Otherwise, why did they not come after you? … so you see. This means only the scum who could not be strong,” he said.

His address followed an offer by the rebels, granting him a safe exit.

“If he leaves Libya immediately, during 72 hours, and stops the bombardment, we as Libyans will step back from pursuing him for crimes,” Mustafa Abdel Jalil, head of the opposition National Council, told Al Jazeera on Tuesday.

“Conditions are that firstly he stops all combat in the fields, secondly that his departure is within 72 hours; thirdly we may waive our right of domestic prosecution … for the crimes of oppression, persecution, starvation and massacres,” Jalil said.

The offer came amid reports that Gaddafi had sent feelers to the opposition movement, expressing willingness to negotiate his exit.

Unconfirmed reports indicated that Gaddafi was willing to step down in return for having war crimes charges against him dropped and a guaranteed safe exit for him and his family.

He also reportedly wanted guarantees from the UN that he will be allowed to keep his money.

Libyan state television has, however, denied the reports. An official from the Libyan foreign ministry described the reports as “absolute nonsense”.

Hoda Abdel-Hamid, Al Jazeera’s correspondent in the eastern city of Benghazi, said she was hearing conflicting accounts of what happened.

“The head of the opposition National Council says there were indirect talks with people from Tripoli, who were given the green light from the regime,” she said. “But the spokesman for the National Council denies any of that.”

The US, on its part, rejected any possible amnesty for Gaddafi.

“Any departure from Libya does not exempt Mr Gaddafi or his family from any responsibility and accountability for what has occurred,” PJ Crowley, spokesman for the White House, said on Tuesday.

Gaddafi has triggered international outrage by seeking to violently quell the uprising sweeping across his North African nation.

His forces, backed by war planes, are attempting to wrest back territories under rebel control. The intense fighting has resulted in deaths and destruction, and the rebels have been pressing the international community to impose a no-fly zone.

“We are all waiting for one,” he said. The rebels can take on “the rockets and the tanks, but not Gaddafi’s air force”.

But Hillary Clinton, the US secretary of state, told a British television network on Tuesday that a no-fly zone over Libya ought to have international backing rather being a US-led effort.

“We want to see international community support for it,” said Clinton.

As the international community debates its future course of action, pro-Gaddafi forces have strengthened their military position, squeezing rebel-held towns in the west and checking the advance of rebel fighters westwards towards the capital, Tripoli.

Gaddafi told Turkey’s state media on Tuesday that Libyans would fight a no-fly zone imposed by Western nations, saying that such an order from the US or the UK would show that the West is only interested in seizing Libya’s oil.

Al Jazeera has heard reports that Gaddafi snipers were on Tripoli rooftops shooting randomly from the main square and that they were storming houses in some neighbourhoods and killing residents.

Fighting is also intensifying in Ras Lanuf – a key Libyan oil terminal in the centre of the country – amid reports of several air strikes. Az Zawiyah, 50km west of Tripoli, remains under siege, the towns of Misurata and Bin Jawad are also under attack.

“Whatever wishful thinking rebel groups may have been engaging in – that Colonel Gaddafi was somehow in the mood for compromise …  you have to look at the reality on the ground, and that is the use of force and the confidence of Gaddfi’s forces is increasing, not decreasing,” she said.

She said Az Zawiyah is “almost entirely crushed by continued bombardment” and that there’s been an escalation of force further to the east of the country.

Reuters news agency reports that tanks were closing in on the rebel-held main square of Az Zawiyah on Wednesday and that according to residents, snipers were shooting at anything that moved.

Hundreds if not thousands of people have died since Libya’s uprising began on February 14 in an effort to end Gaddafi’s rule, although tight restrictions on media make it near impossible to get an accurate number.

According to the International Organisation for Migration, over 215,000 people have fled the violence in Libya in recent weeks, although Ibrahim Osman, a Red Crescent official, said forces loyal to Gaddafi have prevent roughly 30,000 migrant workers from crossing into Tunisia, and forcing many to return to work in Tripoli. 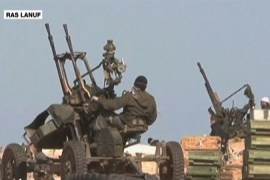 As Gaddafi’s forces move east in bid to push back rebels and recapture fallen towns, the battle looks set to intensify. 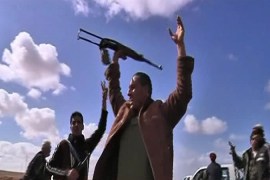 Forces loyal to Gaddafi are in a fierce fight to regain control of rebel-held positions like oil-rich Ras Lanuf. 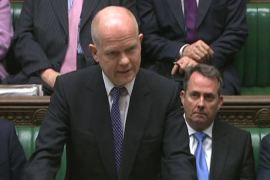 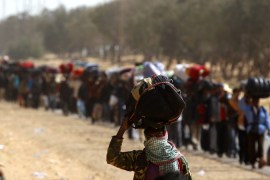