At least 25 people have been killed and more than 250 injured in an earthquake that struck southwest China near the border with Myanmar.

The epicentre of the 5.4-magnitude quake, which struck at 12:58pm (0458 GMT), was located about 225km west-southwest of Dali in Yunnan province, the US Geological Survey (USGS) reported on Thursday.

China Central Television said the quake hit while many people, including students, were home for a customary midday rest. The report said at least two students were among those killed, but didn’t give details.

The state broadcaster showed several buildings with concrete foundations that had cracked and buckled.

On Friday, tremors from a separate quake off Japan’s Pacific coast could be felt in Beijing, Al Jazeera’s Melissa Chan reported. No injuries or damage was immediately reported in China from the massive quake, which has devastated much of northeastern Japan.

CCTV reported that about 100 armed police, firefighters and soldiers were using three excavators to try to rescue a man and a girl trapped inside a four-story building that had partially collapsed in Thursday’s quake.

He Shuhui, head of an armed police squad, was quoted as saying they were trapped in a stairway on the ground floor of the building.

Another official on duty at the center, Gao Shaotang, said many houses had been toppled. Xinhua said the army was sending 400 soldiers to the site for rescue efforts.

Witnesses told the state news agency that parts of a supermarket and hotel had caved in, and that people were buried in the debris.

Xinhua said the quake-prone region has been hit by more than 1,000 minor tremors over the past two months.

A massive earthquake rocked the southwestern Chinese province of Sichuan in May 2008, leaving nearly 87,000 people dead or missing. 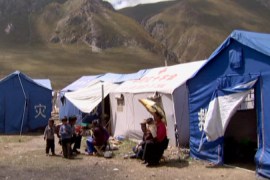 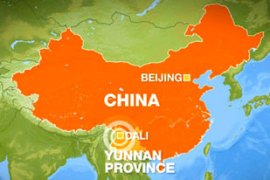 Waters begin to drop after soldiers use missiles to clear drainage channels.