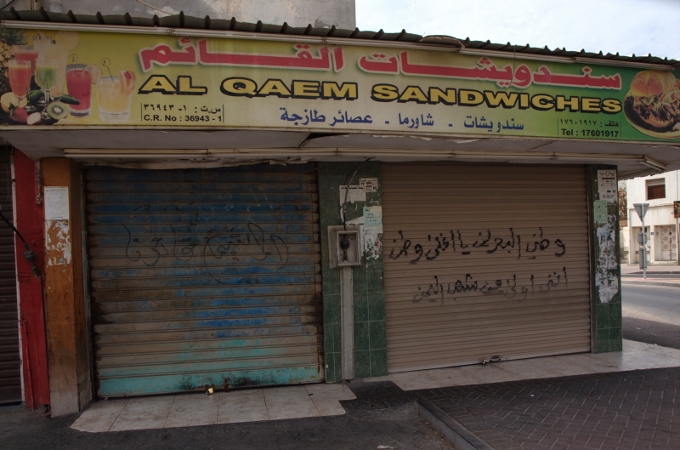 Villages like Karzakan saw protests last month, and many buildings still have the graffiti to prove it

Karzakan, Bahrain — Driving through this cheerless village, 20 kilometres southwest of Manama, it is easy to understand why thousands of protesters have camped out in Pearl Roundabout for nearly a month.

Karzakan feels a world apart from Bahrain’s glimmering capital. A clutch of grim concrete buildings – a fruit and vegetable stand, a shawarma shop, a few construction firms – sit along the poorly-maintained main road. A group of schoolchildren ride by on the back of a pickup truck, chanting yasqat Hamad (“down with Hamad”) and bouncing up and down as the driver navigates the potholed street.

Many Shia citizens of the Gulf island demand the ouster of the PM and less power for the ruling Khalifa family.

Many of Bahrain’s villages lack basic services – connections to the municipal sewage grid, regular garbage collection – and the stench of trash and waste hovers over some of Karzakan’s back alleys and side streets. Residents say the poor sanitation leads to occasional outbreaks of disease, particularly among young children.

“This is an oil country! But look at the quality of public services here,” Ali Hasan said, showing me a fetid pool of sewage behind a housing block. “How long has Europe had sewers? And they don’t even have any oil!”

Karzakan, and a half-dozen other villages, were largely deserted during day-long visits on Tuesday and Wednesday: parking areas were empty, sidewalks were devoid of pedestrians, and only a few shops were open. The few residents who were out said many of their neighbours have joined the protesters in Manama’s Pearl Roundabout.

“There are one or two stores open, and everything else is closed,” said Abu Hussein, an elderly man tending the cash register on Karzakan’s main road. “Where are the people? The people are in Manama.”

Some of these villages have seen violent clashes with police in recent years: Security forces in Karzakan used tear gas at a wedding reception and shot a man last month, for example. But they seem to have largely withdrawn, and there was no visible police or army presence on the streets earlier this week.

‘I would fight for Bahrain’

Supporters of Bahrain’s government have tried to portray these protests as sectarian. And the country’s impoverished villages, from which many of the protesters hail, do tend to be predominantly Shia. In Diraz, a village along the northern coast, Ayatollah Ali Sistani stares down from a large poster on the side of a mosque. Ayatollah Mohammed Hussein Fadlallah, the late Lebanese cleric who died last year, is another common sight. 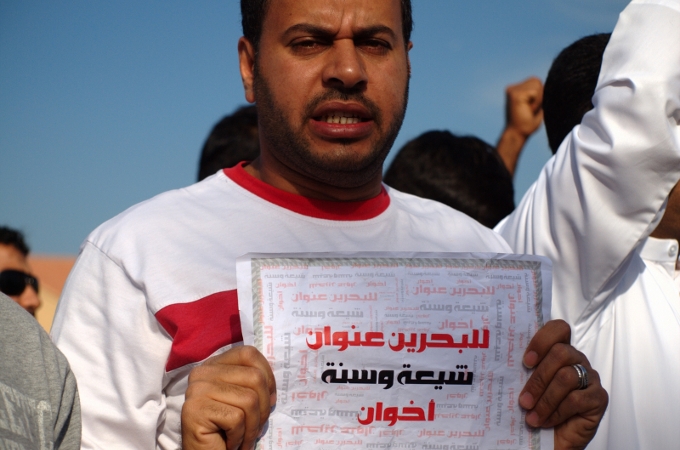 Restaurants and shops have names like Bawabat Mashhad (“Gates of Mashhad”) and Shams an-Najaf (“Sun of Najaf”), allusions to majority-Shia Iran and southern Iraq.

But the fact that many protesters are Shia does not mean their protests are sectarian. That narrative – promoted by segments and guests on Bahraini state television and radio – is not really supported by facts on the ground. There are Sunnis protesting against the government, and Shia who support the Khalifa monarchy. The protest slogans – “we are Sunni and Shia, this country is not for sale” – are ecumenical.

The most explosive allegation is that protesters are simply agents of the Iranian government. “They are funded by Iran,” one man told me. “They are trying to strengthen the Khamenei regime,” another said, referring to Ayatollah Ali Khamenei, Iran’s current supreme leader.

Supporters of the monarchy cannot marshal much evidence to support these claims, though. A few protesters speak approvingly of the Iranian government or hang portraits of Ayatollah Ruhollah Khomeini from their rearview mirrors, but none say they want Iran to play a role in Bahraini politics.

“If Iran tried to invade, I would fight for Bahrain. I would die for Bahrain,” Mohammed Matrouq told me outside a fruit market in Diraz, jabbing his finger into my shoulder for added emphasis. “We want a free Bahrain.”

‘The demands of all Bahrainis’

The claims of Iranian involvement bring to mind the warnings from Western analysts who think the revolts sweeping Arab countries will usher in Islamic theocracies. Both seize on a few pieces of scattered evidence – the occasional Khomeini sympathiser in Bahrain, for example, or the Muslim Brotherhood’s limited role in post-Mubarak Egypt – to build a thin narrative.

That narrative helps to mask the real division between Bahrain’s pro- and anti-government camps, which is economic, rather than sectarian.

Many of the government’s supporters hail from more privileged economic backgrounds. They have professional jobs, whether in the private sector or in state-owned enterprises; they live in wealthier neighbourhoods in the capital or in places like Rifaa’, a town in central Bahrain inhabited mostly by Sunnis, including the king and the prime minister. And they complain that weeks of protests have cost the country billions.

“Our economy is being affected. The Formula One race was canceled, our hotel bookings have become almost zero,” said Rashid al-Dossary, a banker. “Children are out of school, and they [the protesters] are blocking the roads every day.”

Even supporters of the government acknowledge the country’s economic problems. Earlier this week, a Sunni man named Abdullah stood in the parking lot of Bahrain’s Financial Harbour, watching the protesters on the street outside. He said the main problem was a lack of high-paying jobs for educated Bahrainis – whether Sunni or Shia.

“They [the protesters] want housing, jobs for the unemployed and better salaries,” said Abdullah al-Khalifa, an employee of Banagas, the state-owned natural gas company. “That’s the demands of all Bahrainis.”

Running out of patience

Bahrainis like Abdullah are basically asking their countrymen to wait – to trust that the government’s policies will, slowly, grow the economy and improve living standards. 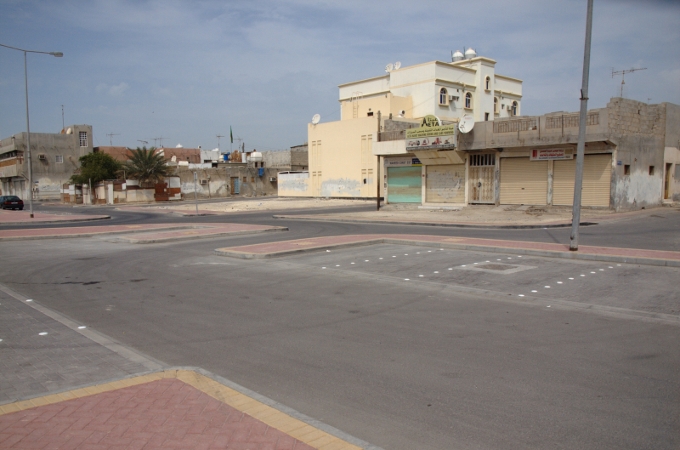 Villages like Karzakan were deserted this week; residents say many of their neighbours protesting are in Manama

Anti-government protesters dismiss that argument: “It’s easy to say, ‘stop protesting and wait,’ when you live in Rifaa’,” Hussein al-Amir told me as he changed the oil of an old Chevrolet outside a Karzakan garage.

The road from Karzakan suddenly smooths out as one gets closer to Rifaa’, just three kilometres to the east. Rifaa’ feels like an American-style suburb, with single-family homes and carefully maintained lawns organised neatly along a well-maintained street. A shopping centre boasts American fast food chains and late-model cars.

But this prosperity is largely confined to the capital and a few other (mostly Sunni) communities across the island. Residents of the country’s impoverished villages do not expect to see much investment, despite the government’s recent promises, nor do they expect the king and prime minister to quickly find them jobs. Ali, the man who pointed out the pool of sewage in Karzakan, said all of his applications for government jobs have been rejected or simply ignored.

Other paths of upward mobility are closed as well. Just up the road from Karzakan is a large training facility for the Bahrain Defence Force, the country’s military. But few of the village’s residents would have the opportunity to serve: The army is mostly staffed by outsiders – soldiers imported from Pakistan, Syria, Jordan – instead of Bahrainis.

“We can’t find work anywhere, and all we get is 150 dinars ($400) per month for a few months,” Hasan said, referring to the national unemployment benefit. “The government wants to give just enough to make the people quiet.”