Military talks aimed at easing tensions between South and North Korea collapsed during their second day when the North withdrew from discussions, according to a South Korean government official.

The rival Koreas began discussions on Tuesday, in the border village of Panmunjom, the first talks since the North’s shelling of a South Korean island in November.

It said “the northern side crossed back over the military demarcation line, unilaterally, and didn’t even inform [the South] of their actions”, Al Jazeera’s Harry Fawcett reported from Seoul, South Korea’s capital.

The South wanted to ensure that the agenda focused on the North’s sinking of a South Korean ship, that killed 46 sailors in March, as well as the North’s shelling of the disputed island of Yeonpyeong,.

The North has said the South provoked the shelling of Yeonpyeong by firing artillery rounds into its water during a military drill.

In the current talks, North Korea wanted much wider discussions on military provocations and trying to defuse tensions between the neighbours, Southern officials said.

The South also wanted senior ministerial-level talks, while the North only offered its deputy ministers for participation in discussions, our correspondent said.

The military talks were an attempt to restart the six-way talks aimed at ending North Korea’s nuclear-weapons programme, last held more than two years ago when the North walked out, announcing the process dead.

“When they [North Korea] need something, which usually means money, they first drive tensions high, then switch to the charm offensive and start talks in order to get something,” Andrei Lankov, a North Korea expert at Kookmin University in Seoul, said on Tuesday.

“If they do not get what they need, they turn the switch back to the confrontational mood.”

Tensions have eased somewhat on the divided peninsula since the start of the year, with both sides calling for dialogue, raising hopes the neighbours could rebuild relations shattered over the past two years.

North and South had agreed to talk soon after their respective superpower patrons, China and the US, called jointly for inter-Korean dialogue.

The North has said it wants to return to six-party negotiations, but the South and the US have questioned its sincerity about denuclearising – pointing to its revelations last November about a uranium enrichment programme as proof.

Pyongyang says the uranium programme, which potentially opens a second route to make an atomic bomb after its plutonium programme, is for peaceful energy-making purposes.

South Korea and the US want the UN Security Council to punish the North for the programme because it contravenes past resolutions, whereas China favours dealing with the matter in the six-party talks which also involve Japan and Russia.

The South’s Wi Sung-lac is due to visit Beijing on Thursday to discuss the best approach to deal with the North.

South Korea also says the North, squeezed by UN sanctions for nuclear and missile tests, only wanted to restart six-party talks to get aid.

The South says it will only resume economic help when the North totally dismantles its atomic programme.

Tuesday’s colonel-level talks were aimed at setting the time and agenda for higher-level dialogue, possibly between their defence ministers.

The South had previously indicated that talks between the two sides may not work. “But it is premature to say talks won’t take place,” Al Jazeera’s Fawcett said. 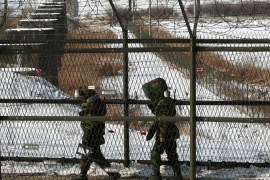 North and South Korea reopen crucial communications line, the first time since the North shelled an island in the South. 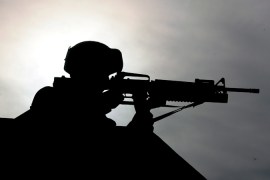