The military and internal security, along with the ruling party and an emerging business elite, have formed the core of an establishment that has sustained Hosni Mubarak, the Egyptian president, for more than three decades.

As protests against Mubarak’s rule continue, the political order is changing rapidly, with the ruling party’s grip unravelling and the army’s position of power further strengthened.

Security forces and police have abandoned their posts in the face of the unprecedented demonstrations, and while the president has reshuffled the cabinet and appointed a prime minister for the first time, it is too little for most of the opposition.

Mohamed ElBaradei, one of the leaders of the protesters’ negotiating team, said on Friday that Mubarak should step down and let a presidential council made up of several figures – including the military – rule for a year to rewrite the constitution ahead of elections set for September.

Mubarak, too, is looking to the military to secure his position. So just how powerful is the army?

Egypt’s army – the world’s 10th biggest with 468,500 active members and 479,000 in the reserves – has been at the centre of power since officers staged the 1952 overthrow of the country’s monarchy.

All four Egyptian presidents since then have come from the military, now led by Field Marshal Mohamed Hussein Tantawi, 75, who is the defence minister.

It benefits from about $1.3bn a year in US military aid.

The armed forces are eclipsed numerically by the internal security forces, which have grown since the failed Islamic revolt of the 1990s into a vast force of 1.4 million people, say US diplomats in leaked cables.

The army runs a wide variety of businesses in Egypt – hotels, construction firms, factories – a portfolio which gives it control of a double-digit percentage of Egypt’s economy.

That means billions of dollars in annual revenue, an economic base that has propelled some senior members of the army into the ranks of the Egypt’s financial elite.

Over the years, the army has built up its business activities, including building roads and airports, food processing and manufacturing.

This has caused friction with some of the businessmen whose political power grew in the ruling party, with the military securing lucrative contracts which they might have previously taken.

Chief of General Staff Lt-Gen Sami Hafez Annan has been tasked with taking care of political affairs behind the scenes.

Annan faces a difficult challenge in instigating changes to the government to try to satisfy protesters and the newly invigorated opposition, while attempting to keep the current political order intact.

He must protect protesters on the streets, manage politicians and maintain harmony within army ranks.

Suleiman, 74, is seen as fiercely loyal to Mubarak and has been deeply involved in Egypt’s national security and foreign policy for almost 20 years.

As intelligence chief, Suleiman was in charge of the country’s most important political security issues and and was the mastermind behind the fragmentation of armed Islamic groups who led the uprising against the state in the 1990s.

In recent years, he has mediated between rival Palestinian groups Fatah and Hamas, as well as between anti-government fighters and the government in Yemen.

In response to the country’s political vacuum, an impromptu group of prominent Egyptians who call themselves the “council of wise men” have stepped in to facilitate a transition government.

It includes Amr Moussa, the Arab League secretary-general, and Naguib Sawiris, a business tycoon, who recommended that Suleiman preside over a transitional government.

Sawiris is one of the most influential businessmen in Egypt today, thanks to his rapidly expanding telecom empire under Orascom Telecom, the shareholder of Mobinil, and the investment company Weather.

As chairman of Orascom Telecom, he has been behind the rapid growth of the company.

The organisation now operates GSM networks in seven different countries in the Middle East, Africa, and India, in addition to a number of Internet Service Providers and satellite service providers serving approximately 500 million people around the world.

Hossam Badrawi has been appointed the new secretary-general of the party, replacing Safwat El-Sherif, a Mubarak loyalist.

Badrawi, seen by many as a liberal voice in the NDP, will also replace Gamal Mubarak, Hosni Mubarak’s son, as head of the party’s policies bureau.

He is a member of the board of directors of the NDP and chairs the Business Secretariat. He is also chairman of the Policy Secretariat’s Education Sub-Committee and co-supervises its Health Sub-Committee.

The newly appointed secretary-general is a member of several political institutions in Egypt including the Upper Chamber of the Egyptian Parliament and the Board of Governance of the NDP.

He was an elected member of the Egyptian parliament and chaired the Committee of Education and Scientific Research from 2000 to 2005.

Badrawi is also a member of the Supreme Council for Human Rights and chairs the Social Human Rights Committee in the council.

The reshuffle got rid of some wealthy businessmen politicians who have dominated the government in recent times, including Gamal Mubarak.

Many of them have had their assets frozen and are prohibited from travelling.

On Friday, Egypt’s prosecutor-general barred Rashid Mohammed Rashid, the former trade and industry minister, from leaving the country, and had his bank accounts frozen.

The same measures was also taken against Habib al-Adly, the former interior minister, and Ahmed Ezz, a prominent businessman.

Rashid was the first Egyptian businessman to take up a cabinet position in Egypt, in 2004.

He was entrusted with opening Egypt up to international trade and investment to attract foreign direct money into industry and create jobs.

He also managed Egypt’s trade agreements with the US, Europe, Africa and the Middle East and growing Egyptian exports and led a new form of public-private partnership in Egypt by involving members of the private sector in the government policy formulation process.

Ezz is an Egyptian parliamentary member and businessman, and the chairman and managing director of Al Ezz Industries, a steel and ceramic manufacturer in the Middle East and North Africa.

His factories have made Egypt one of the biggest steel manufacturer in the Middle East.

He is said to hold more than 60 per cent of the market share in the country’s steel industry.

Ezz resigned from the ruling National Democratic Party on 29 January 2011. 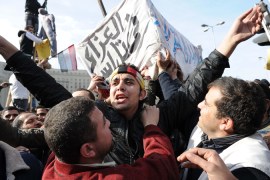 Opposition group says it is sticking to the protesters’ main condition that Hosni Mubarak step down. 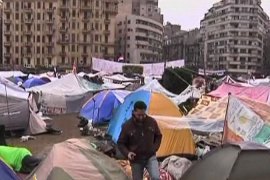 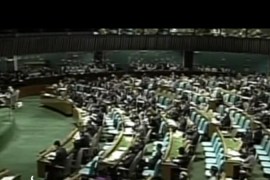 Egypt not up for discussion at UNSC

Though Egypt crisis continues, UN Security Council has not broached the issue. 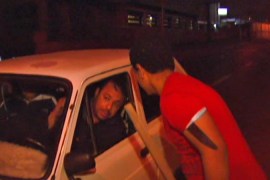 An Al Jazeera online producer makes his way through a series of citizen-monitored checkpoints.