Jhalanath Khanal, Nepal’s newly elected prime minister, has been sworn in at a ceremony in Kathmandu, the country’s capital, while discussions on important cabinet posts continue.

Khanal, chairman of the Unified Marxist Leninist (UML) party, took his oath of office on Sunday in front of Ram Baran Yadav, the Nepalese president.

“I will remain committed and honest to the nation and its people to fulfill my duty,” Khanal said.

The ceremony marks the end of a seven-month leadership vacuum in the Himalayan nation.

However, Khanal was unable to name a cabinet because of continuing negotiations with his main coalition partner, the Communist Party of Nepal (Maoist), over key positions.

Khanal was elected to the premiership on Thursday, after securing the support of the Maoists, the largest force in Nepal’s 601-member parliament.

Sixteen previous rounds of voting failed to produce a winner.

Pushpa Kamal Dahal, the Maoist chairman, who is better known as Prachanda, said he had decided to back Khanal to end the political standoff.

Khanal’s predecessor Madhav Kumar Nepal, also of the UML, led a coalition government backed by the centrist Nepali Congress, but his government fell last June under intense pressure from the Maoists.

The Maoists are now thought likely to hold major ministries, while the country’s second-largest party, the Nepali Congress, has said it will remain in opposition.

The reintegration of 19,000 Maoist fighters who fought a decade-long insurrection against state security forces is one of Khanal’s main challenges.

Nepal’s civil conflict ended in 2006 and led to the abolition of the monarchy, ushering in a period of transition to democracy.

A new constitution, intended to reshape the country following the end of the monarchy, is scheduled to be completed by May, but disagreements between the parties have raised fears of missing the deadline. 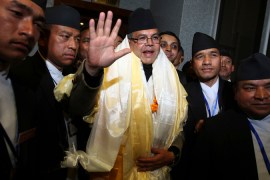 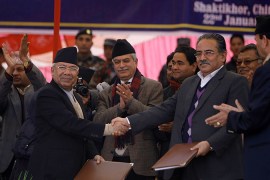 Nepal’s Maoists hand over thousands of fighters to the government in a bid to boost the country’s peace process. 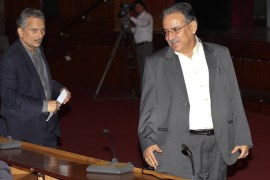