An Iranian court has begun closed-door proceedings in the espionage trial of three Americans, two still in custody and one freed on bail.

The trial on Sunday of Shane Bauer and Josh Fattal, along with that of Sarah Shourd, who was released on $500,000 bail in September, comes 18 months after they were arrested on July 31 2009 near Iran’s border with Iraq.

The three, in their late twenties and early thirties, say they were hiking in the mountains of northern Iraq and crossed the unmarked border by mistake.

Iran held them on suspicion of spying, a crime which can carry the death penalty.

Barack Obama, the US president, met Shourd on her return to the United States, an event he called “bittersweet” due to the continued detention of the other two, one of whom is Shourd’s fiance.

Mahmoud Ahmadinejad, the Iranian president, suggested last February that the Americans might be released as part of a prisoner swap for Iranians he says were abducted or tricked into going to the United States and jailed without due legal process.

Masoud Shafii, their lawyer, said he did not expect the trial to be delayed again, as it was in November when the court said it could not proceed without Shourd being present.

“Sarah was not invited last time but this time she was invited, the foreign ministry summoned her. Whether she comes or not is not relevant from a legal point of view,” he said in an interview at his Tehran office.

While not able to confirm that Shourd would definitely not turn up, Shafii said he would present the court with a written statement he had he received from her via the Swiss Embassy which represents US interests in Iran.

Washington has had no diplomatic ties since the 1979 Islamic Revolution and the subsequent storming of the US embassy by revolutionary students.

Shafii said his repeated requests to visit his clients, held in Tehran’s notorious Evin jail, had been rejected and he had not seen them since Shourd’s release in September.

He said he had arranged with the judge to be able to meet them before the trial started.

“I have studied all the details and I am sure that my clients are not guilty and the espionage charge does not have any substance,” Shafii told the Reuters news agency.

“Even if the illegal entry happened, due to the fact that the border is not signed and they could not have recognised it, even if it did happen, they are not at fault.”

Shafii said illegal entry into Iran could carry a penalty of between 18 months and three years and was upbeat about the chances for a no guilty verdict or a sentence which would see them released. 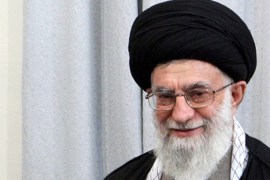 Iranian supreme leader urges Egyptians to follow in the footsteps of Iran’s 1979 revolution.