George Bush, the former US president, has cancelled a planned visit to Switzerland next week.

While human rights groups have said the cancellation was due to the risk of legal action against him for alleged torture, organisers said they did not want to risk violence during protests by left-wing groups.

David Sherzer, Bush’s spokesman, said the former president was informed on Friday by the United Israel Appeal that his February 12 dinner speech in Geneva has been called off.

Human rights groups said they had intended to submit a 2,500-page case against Bush in the Swiss city on Monday for alleged mistreatment of suspected militants at Guantanamo Bay, the U.S. naval base in Cuba where captives from Afghanistan, Iraq and other fronts in the so-called War on Terror were interned.

Pressure has been building on the Swiss government to arrest him and open a criminal investigation if he enters the Alpine country.

Keren Hayesod, the organiser, announced on Saturday that they were cancelling Bush’s participation on security grounds – not because of the criminal complaints.

Saturday’s edition of Swiss daily Tribune de Geneve quoted the Jewish charity’s lawyer, Robert Equey, as saying the visit was canceled because of the risk that protests by left-wing groups could result in violence.

Protest organisers had called for participants to each bring a shoe to the rally outside the lakeside Hotel Wilson where the dinner was to be held.

The shoe was meant to recall the moment an Iraqi journalist threw his footwear at Bush during a news conference in Baghdad in 2008.

Groups including the New York-based Human Rights Watch and International Federation of Human Rights (FIDH) said the cancellation was linked to growing moves to hold Bush accountable for torture, including waterboarding.

Bush, in his Decision Points memoirs on his 2001-2009 presidency, strongly defends the use of waterboarding as key to preventing a repeat of the September 11 attacks on the United States.

Dominique Baettig, a member of the Swiss parliament from the People’s Party, wrote to the Swiss federal government last week calling for the arrest of Bush for alleged war crimes if he came to the neutral country.

Swiss judicial officials have said that Bush would still enjoy a certain diplomatic immunity as a former head of state. 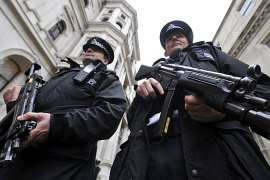 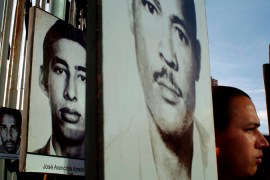 CIA-trained ‘terrorist’ in US court

Accused of killing 73 in an airline bombing, Luis Posada Carriles charged with immigration violations, not terrorism. 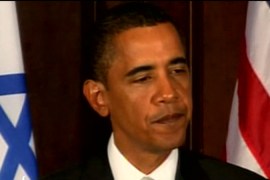 Leaked documents show that US wanted to start talks from scratch – a cause of frustration for Palestinian negotiators.