An explosion at a pipeline in Egypt that supplies gas to Jordan and Israel has been blamed on a gas leak, according to the country’s natural gas company.

Earlier reports suggested that sabotage had been behind the blast on Saturday.

Magdy Toufik, the head of Egypt’s natural gas company, said in a statement that the fire broke out “as a result of a small amount of gas leaking” in the terminal at the pipeline that runs through the El-Arish area of Egypt’s north Sinai.

However, a local security official said an explosive device was detonated inside the terminal, and the regional governor, Abdel Wahab Mabrouk, said he suspected sabotage.

Jordanian officials are scrambling to rearrange power supplies after the Jordanian route, that runs from El-Arish to Aqaba and then up to Amman, was damaged by the explosion.

It was reported that the gas pipeline running to Ashkelon in Israel has not been affected. There were no reports of any casualties as a result of the blast.

The governor of Sinai told Al Jazeera that the fire that resulted from the explosion of the gas supply line had been controlled and that the infrastructiure at the gas terminal had not been severely damaged.

“The armed forces and the authorities managed to close the main the source of flow and are trying to control the fires,” a source said.

But regardless of the cause of the blast, the result has been a strain on the Jordanian economy at a very difficult time, our correspondent added.

She said the blast is likely to cost Jordan around $4m a day, at a time when the country is trying to implement economic and political reforms.

Jordan does not have any of its own reserves and currently gets all of its gas from Egypt.

“All power plants in Jordan are having to operate on burning fuel oil and diesel in order to provide the country with electricity,” Maabreh told our correspondent.

Egyptian authorities have promised to repair the pipeline within a week.

Jordan only has oil and gas reserves to last around three weeks, but they have called the current situation manageable, El-Shamayleh said.

Earlier on Saturday, Egyptian state television reported that “saboteurs took advantage of the security situation and blew up the gas pipeline,” adding that there had been a big explosion.

Residents in the area also reported a huge explosion and said flames were raging in the area.

The security presence in the Sinai province is very light.

According to Al Jazeera’s sources, eyewitnesses are being interviewed by authorities and the investigation is focusing on some bedouin tribes of Northern Sinai.

Bedouin tribesmen of the Sinai Peninsula attempted to blow up the pipeline last July as tensions intensified between them and the Egyptian government, which they accuse of discrimination and of ignoring their plight.

“They do not enjoy the wealth that the state generates from the Sinai peninsula, the money has not benefitted the communities there,” Al Jazeera’s correspondent in Egypt said.

“The issue of security is often used in Egyptian politics but many Egyptians say that the tensions inside Egypt have been because of the government itself.

“Bedouins, arms trade and drug trafficking are some of the internal issues that the central government in Cairo has failed to deal with,” our correspondent said.

The gas supplies from Egypt also account for 40 per cent of Israel’s gas imports.

Although the gas supply route to Israel has not been affected by the explosion, Israeli authorities remain concerned as the events have been unfolding in Egypt over the last few days.

Al Jazeera’s Tony Birtley, reporting from Jerusalem, said that “Israelis have been very jittery for the last 10 days, if a government comes into power in Egypt that is not sympathetic to Israel then it will present security issues for Israel”.

“Israel is realising that their good friend [Mubarak] is on his way out, and they are not sure who is on the way in,” he said. 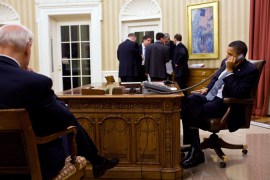 We ask whether events in Egypt will change the US approach to and vision of the Middle East. 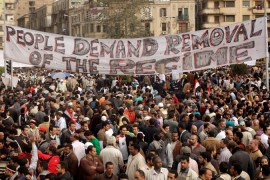 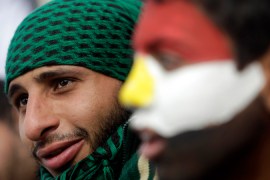