US president Barack Obama has said that Libyan leader Muammar Gaddafi has lost his legitimacy to rule and urged him to step down from power immediately.

Obama’s remarks came in a call on Saturday to Angela Merkel, the German chancellor, sharpening US rhetoric after days of deadly violence – and criticism that Washington was slow to respond.

“When a leader’s only means of staying in power is to use mass violence against his own people, he has lost the legitimacy to rule and needs to do what is right for his country by leaving now,” the White House said in a statement, summarising their telephone conversation.

“The president and the chancellor shared deep concerns about the Libyan government’s continued violation of human rights and brutalisation of its people.”

The White House has previously stopped short of calling for Gaddafi to leave, saying – just as in other countries affected by a wave of regional unrest – that only Libya’s citizens had a say in choosing their rulers.

US secretary of state Hillary Clinton echoed Obama’s tougher stance, and said Libyans had made their preferences on the issue clear.

“We have always said that the [Gaddafi] government’s future is a matter for the Libyan people to decide, and they have made themselves clear,” Clinton said in a statement.

“[Gaddafi] has lost the confidence of his people and he should go, without further bloodshed and violence.”

The Obama administration had been criticised for its relatively restrained response to Gaddafi’s bloody crackdown on an uprising against his four-decade rule.

But White House officials said fears for the safety of US citizens in Libya had tempered Washington’s response to the turmoil.

Washington announced a series of sanctions against Libya on Friday, after a chartered ferry and a plane carrying US citizens and other evacuees left Libya.

Clinton said she signed an order directing the State Department to revoke US visas held by senior Gaddafi government officials, their family members and others responsible for human rights violations in Libya.

“As a matter of policy, new visa applications will be denied,” she said.

The White House said Obama and Merkel reaffirmed their support for the Libyan people’s demand for universal rights and agreed Gaddafi’s government “must be held accountable”.

“They discussed appropriate and effective ways for the international community to respond,” the White House said.

“The president welcomed ongoing efforts by our allies and partners, including at the United Nations and by the European Union, to develop and implement strong measures.”

Obama has been holding a series of discussions with world leaders about the unrest in Libya. The administration is hoping that the world “speaks with a single voice” against Gaddafi’s violent crackdown, and the president is sending Clinton to Geneva on Sunday to coordinate with foreign policy chiefs from several countries.

Clinton will try to rally support against Gaddafi on Monday at the UN Human Rights Council, where she will to consult a range of foreign ministers on sanctions.

Washington is examining options including sanctions and a no-fly zone to try to stop Gaddafi’s violent suppression of anti-government protests. 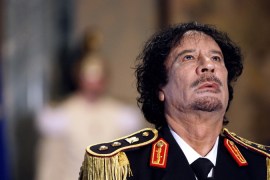 Pariah to partner – and back again

We look at Libya’s past and present role in the global economy. 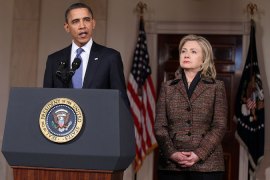 US slaps sanctions on Libya 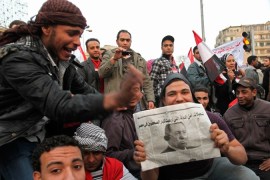 A revolution far from over 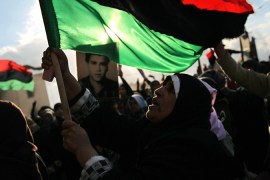