At least two people have been killed in an industrial town in the northeast of Oman, after police fired rubber-coated bullets at anti-government protesters.

The military moved in to secure an area in the town of Sohar on Sunday where about 2,000 demonstrators had gathered for a second day to demand political reforms, according to witnesses reported by the Reuters news agency.

“Two were killed after being shot with rubber bullets as protesters attempted to storm a police station,” a security official said, requesting anonymity.

State news agency ONA confirmed that there had been casualties in Sohar, saying that police and anti-riot forces had clashed with demonstrators.

“Police and anti-riot squads confronted this group of wreckers in a bid to protect people and their properties, which caused casualties,” it said.

Witnesses said a police station and a government building were set on fire and that a nearby supermarket was looted.

Helicopters could be heard overhead and later reports said that many protesters moved out towards the entrance to Sohar’s industrial sea port.

The protests in Sohar, 200km northwest of Muscat, prompted Oman’s leader, Sultan Qaboos bin Said, to introduce swift appeasing measures – giving orders for the provision of 50,000 jobs and unemployment benefits worth nearly US$400 a month.

A committee will also be established to examine bestowing some legislative powers on the 84-member Shura council, an elected body which currently acts in a purely advisory capacity in the absolute monarchy, where political parties are banned.

Basma al-Rajhi, an Omani political activist, told Al Jazeera that she had heard reports that police had tried to block the protests leading to “clashes” with a number of young protesters.

The protests in Oman come amid rising political tensions in the Middle East  and North Africa, with uprisings and protests in Bahrain, Tunisia, Egypt, and Libya.

Al-Rajhi, who was taking part in a sit-in in Muscat, the capital, said: “Omanis are calling for [the government to] combat corruption and fight the rising cost of living, in addition to many other issues, [such as] raising salaries and [greater] media freedoms.”

She said that protesters had not been satisfied with government decrees, announced earlier this week, aimed at tackling these issues.

Protests also took place in the southern town of Salalah where a small number of demonstrators have camped out since Friday near the office of a provincial governor.

Sultan Qaboos, who has ruled Oman for the past 40 years, had tried to ease tensions by reshuffling his cabinet on Saturday, a week after a small protest in the capital Muscat.

The demonstrators in Oman, as with some of the protests in other parts of the region, have emphasised their loyalty to their ruler, whole voicing their dissatisfaction with his officials.

Jackie Spinner, a journalist who was in Sohar at the time of the protests, said that it was unusual for Oman to be the scene of demonstrations.

“Most of the Omanis that I’ve talked to have said they haven’t seen anything like this in the last four decades … they have not seen this level of anger, or any widespread demonstrations against the government, in the past 40 years.”

Qaboos deposed his father in a 1970 palace coup to end the country’s isolation and use its oil revenue for modernisation.

He appoints the cabinet, but in 1992 introduced the elected advisory Shura Council. 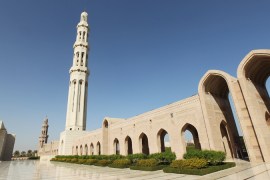