Abdurrahman Mohamed Shalgham, Libyan ambassador to United Nations, who has defected, made an emotional plea before the UN to save Libya.

“Please, the United Nations, save Libya. Let there be no bloodshed, no killing of innocents. We want a decisive, rapid and courageous resolution from you,” Shalgham told the Security Council on Friday.

Speaking out against Libyan leader Muammar Gaddafi, Shalgham said, “Gaddafi and his sons are saying, ‘either we rule you or kill you'”.

At the UN meeting, Ban Ki-moon, the UN secretary general, and Libya’s entire team of envoys at the world body urged the Security Council to act quickly to help stop the bloodshed in the North African state.

“It is time for the Security Council to consider concrete action,” Ban told the 15-nation council, which gathered to receive a draft sanctions resolution against Libyan leaders.

“The hours and the days ahead will be decisive for Libyans.”

Diplomats said a sanctions vote could come on Saturday.

Earlier, Ibrahim Dabbashi, Libyan Deputy UN Ambassador, said the situation in Libya would get worse and more corpses would be piling up.

“We expect thousands to be killed today in Tripoli, so I call on all the international community to intervene now and to send a clear message to Colonel Gaddafi that he should stop the killing now,” he said.

By some estimates, thousands of Libyans have been killed in recent days in clashes between forces loyal to longtime leader Gaddafi and anti-government protesters.

Al Jazeera’s correspondents at various locations on the Libyan border confirmed that the flow of migrants accelerated on Friday afternoon, following violence in the capital and the west of the country.

The council met behind closed doors to consider a draft sanctions resolution, prepared by France and Britain in consultation with Germany and the United States that called for referring the violence in Libya to the International Criminal Court in The Hague for investigation and possible prosecution.

The six-page draft, obtained by Reuters, calls for an end to the violence and says “the widespread and systematic attacks currently taking place in Libya against the civilian population may amount to crimes against humanity.”

The draft also calls for an arms embargo against Libya as well as travel bans and asset freezes for top Libyan leaders.

A vote on the draft resolution, which will be amended during closed-door negotiations, could come over the weekend, council diplomats said. The council will meet again on Libya on Saturday at 11 a.m. (1600 GMT).

French Ambassador Gerard Araud said all council members, including Russia and China, supported most aspects of the text, although there would likely be questions about the ICC referral.

After the UN meeting, Al Jazeera’s Scott Heidler, reporting from UN headquarters, said that the most important point right now is how to stop the killings in Libya. However, the UN chief told our correspondent that military action was not on the card.

Earlier, Tim Friend, reporting for Al Jazeera from outside NATO headquarters in Brussels, said that much of what the military organisation is capable of – such as providing troops – would have to be sanctioned by the UN before any action could take place. 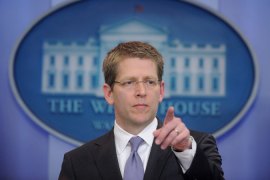 US to impose sanctions on Libya 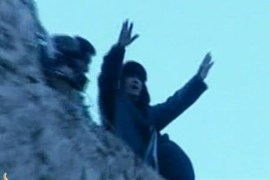 Libyan leader speaks to supporters in the capital’s Green Square, saying he will arm people against protesters. 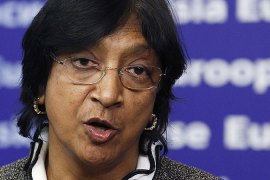 Leaders urged to “step in vigorously” to end bloody crackdown, while envoy says Libyan mission to Switzerland has quit.