The United Nations has said it will extend its mandate for peacekeepers in East Timor for another year.

Since gaining independence from Indonesia more than a decade ago, the fledgling country has struggled to look after its own security.

The Security Council said on Thursday the tiny nation needs to take action to strengthen the “credibility” of its
police force as it extended the stay of the UN mission.

The UN wants to end its peacekeeping mission in East Timor but is wary of fallout from the 2006 unrest that led to the creation of the international force which is now about 1,500 strong. East Timor also plans to hold a presidential election in 2012.

More than 50 officers from the PNTL, the East Timorese police force, face criminal or disciplinary charges but have still been allowed into the new  post-independence force.

Concerns were raised by a UN envoy and some of East Timor’s main aid  partners at a Security Council debate this week attended by Xanana Gusmao, the prime minister.

“I trust the government will find no reason to exempt the 52 officers who face serious disciplinary and criminal charges,” Tsuneo Nishida, the UN ambassador for Japan, said.

Japan is one of East Timor’s biggest donors.

Gusmao, one of the leaders of East Timor’s fight for independence from Indonesia, acknowledged the concerns which have also been raised by Ban Ki-moon, the UN secretary-general.

A UN Security Council resolution passed on Thursday “emphasises the importance of taking all measures necessary to ensure the credibility and  integrity of the PNTL, including resolving any outstanding disciplinary and
criminal charges faced by PNTL officers”.

The resolution recognised political progress since the 2006 unrest but said East Timor “still faces many challenges in areas related to the underlying factors of the 2006 crisis”.

The Japanese envoy noted that East Timor’s budget now exceeds $1bn and its population is now above one million and called for greater emphasis on job creation. 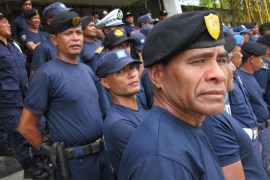 Is East Timor ready for a future without the foreign influence of the UN and other international forces?