Hundreds of demonstrators are gathered at the Pearl roundabout in Manama, Bahrain’s capital, as their protest against the government and ruling royal family entered its ninth day.

The protesters are camped around the 90-metre monument on the junction, with make-shift kitchens serving meals to those staying in the small village of tents.

At several stalls, demonstrators queued for hot drinks and joked about the weather, which turned windy and whipped up sand and litter.

At sunrise on Monday, Hossain Kasar, who has spent the past two nights camped at the monument, said: “I’m feeling happy. But all the people of Bahrain, they don’t want the government of Bahrain.”

Meanwhile, thousands of government loyalists rallied in Manama in support of the monarch.

Bahrain’s opposition wants the nation’s rulers to guarantee they will back up recent conciliatory words with solid actions, as the regime offered talks after nearly a week of protests and deadly clashes that have divided the Gulf nation.

Opposition leaders have laid down a list of demands that include releasing prisoners and giving residents a greater role in politics.

Hassan Mashaima, an exiled opposition figure, told AFP he would return to Manama on Tuesday, as protesters gear up for a rally they hope will bring tens of thousands to Pearl roundabout.

“I have decided to return to my country,” Mashaima said.  The leader of the opposition Haq movement, or the Movement of Liberties and Democracy is based in London and faces charges of terrorism in his native Bahrain.

In a telephone call from the British capital, Mashaima said he would land in Manama on Tuesday at and had “no guarantees” he would not be arrested on arrival. “But under the current circumstances, I cannot remain outside my country,” he added.

The streets in the tiny but strategically important island kingdom were calmer as efforts shifted towards political haggling over demands for the monarchy to give up its near-absolute control over key policies and positions.

But bitterness and tensions still run deep after battles that included riot police opening fire on protesters trying to reclaim the Pearl roundabout and then pulling back to allow demonstrators to occupy the site.

At least seven people have been killed and hundreds injured since anti-government protests reached the Gulf last Monday.

On Friday, army units shot at marchers streaming towards the roundabout, injuring more than 50 people and preventing protesters from gathering there. But after security forces withdrew, the protesters swarmed back to the square and confidently set up camp for a protracted stay.

On Sunday, a general strike by opposition groups and workers’ unions was called off, saying their demand for the right to protest peacefully had been heeded.

In an interview to CNN, Sheikh Salman said on Sunday that protesters would “absolutely” be allowed to stay in the Pearl Roundabout area.

“All political parties in the country deserve a voice at the table,” he said of the proposed dialogue, adding the king had appointed him to lead it and to build trust with all sides.

“I think there is a lot of anger, a lot of sadness, and on that note I would like to extend my condolences to all of the families who lost loved ones and all of those who have been injured.

“We are terribly sorry and this is a terrible tragedy for our nation.”

Barack Obama, the US president, has discussed the situation with Sheikh Hamad, asking him to hold those responsible for the violence accountable.

He said in a statement that Bahrain must respect the “universal rights” of its people and embrace “meaningful reform”.

For his part, William Hague, the British foreign secretary, in a telephone call to Sheikh Salman, said he welcomed the government’s military withdrawal and strongly supported efforts to initiate a dialogue.

Bahrain holds particular importance to the United States as the host of the US Navy’s Fifth Fleet, which Washington sees as the main military counterweight to Iran’s alleged efforts to expand its armed forces and reach into the Gulf.

Bahrain’s ruling Sunni dynasty has strong backing from other Gulf Arab leaders, who fear that Shia powerhouse Iran could gain further footholds through the uprising led by Bahrain’s Shia majority. The Shia majority has often complained of discrimination by the Sunni rulers. 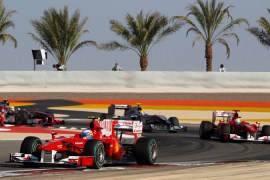 Crown prince says nation must “focus on issues of national interest” as Grand Prix event is called off amid unrest. 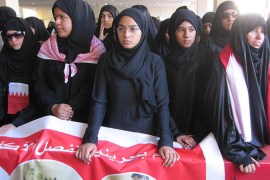 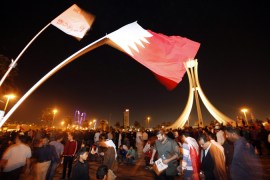 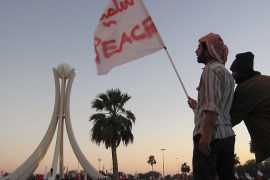 Bahrainis rejoice after army and police retreat from Pearl roundabout just days after violent clashes there.