Calls for change sweeping the Arab world have now spread to the kingdom of Morocco, where thousands of people have taken to the streets in the capital to demand a new constitution.

The demonstrators shouted slogans calling for economic opportunity, educational reform, better health services and help in coping with rising living costs during the march on central Hassan II Avenue in Rabat on Sunday.

A protest organiser said the turnout at the rally was more than 5,000. But police said fewer than 3,000 people had marched.

Many in the crowd waved Tunisian and Egyptian flags, in recognition of the uprisings that toppled the two country’s long-standing rulers.

Uniformed police kept their distance from the protest, but plain-clothes officers with notebooks mingled with the crowd, amid chants of “The people reject a constitution made for slaves!” and “Down with autocracy!”

Some called on Abbas El Fassi, the prime minister, to leave but placards and slogans made no direct attacks on the king.

“This is a peaceful protest to push for constitutional reform, restore dignity and end graft and the plundering of public funds,” said Mustapha Muchtati of the Baraka (Enough) group, which helped organise the march.

The protest was initiated by a group calling itself the February 20 Movement for Change, which has attracted 19,000 followers on the social networking website Facebook

Demonstrations were also planned in Morocco’s other main cities, including Marrakesh, the top tourist destination.

Salaheddine Mezouar, the finance minister, urged citizens to boycott the march, warning that any “slip may in the space of a few weeks cost us what we have achieved over the last 10 years”.

Morocco is officially a constitutional monarchy with an elected parliament. But the constitution empowers the king to dissolve the legislature, impose a state of emergency and have a key say in government appointments including the prime minister. 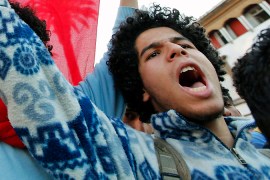 Moroccans riot ahead of protests