The Egyptian army has called for protesters rallying for a ninth day against President Hosni Mubarak’s
regime to go home and “return to normal life.”

In a call for protesters to leave the streets, Ismail Etman, a military spokesman said on state television on Wednesday: “The army forces are calling on you … You began by going out to express your demands and you are the ones capable of restoring normal life.

“I call on the conscious youth of Egypt, honest men of Egypt, we should look forward to future, think of our country, Egypt. Your message has been heard, demands understood, and we are working day and night to secure our homeland for your interest, the honourable people of Egypt.”

Unlike the police, which is widely reviled in Egypt for its repressive tactics, the military is widely admired and is seen as neutral.

Internet service, which has been cut off entirely, has apparently been partially restored in Egypt.

Mubarak’s embattled regime and the powerful military appear to be making a unified push to end a street movement to drive the 82-year-old leader out of power.

The movement built on the work of online activists is fuelled by deep frustration with an autocratic regime blamed for ignoring the needs of the poor and allowing corruption and official abuse to run rampant.

After years of tight state control, protesters emboldened by the Tunisia unrest took to the streets on January 25 and carried out a once unimaginable series of protests across this nation of 80 million.

The army gave a tacit endorsement to the movement on Monday by saying it would not use force against protesters and that they had legitimate demands.

Al Jazeera’s Jane Dutton reported from Cairo that,  “It is the first time that we have heard the army issue that warning.

“It could be linked to the fact that we are seeing an increasing number of pro-Mubarak supporters on the streets.”

On Tuesday, the protesters brought nearly a million people into Cairo’s main square to demand Mubarak leave within days.

Late on Tuesday, Mubarak issued a defiant response in an address to the nation, announcing that he would serve out the last months of his term and “die on Egyptian soil”.

He promised not to seek re-election, but that did not calm public fury as clashes erupted between his opponents and supporters. 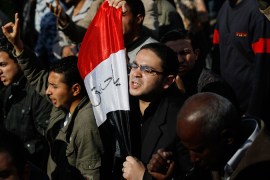 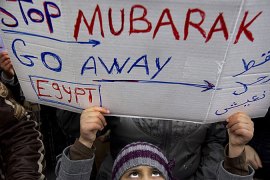 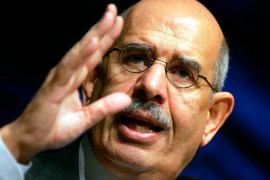 ‘Talks only after Mubarak leaves’

Opposition coalition says they will hold talks with military on transition only after president stands down. 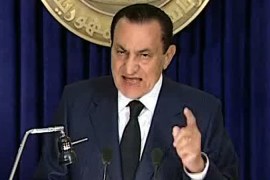