Thousands of demonstrators have rallied in the East African nation of Djibouti to demand that president Ismail Omar Guelleh resign, the latest in a series of demonstrations spurred on by political protests across Africa and the Middle East.

Amid a tight police deployment, the demonstrators gathered at a stadium on Friday with the intention of staying there until their demands were met.

But the demonstration escalated into clashes after dusk, as authorities used batons and tear gas against stone-throwing protesters.

Guelleh has served two terms and faces an election in April, but critics are concerned by changes he made to the constitution last year that scrapped a two-term limit.

Officials from the Union for Democratic Change, an umbrella group of three opposition parties, gave speeches at Friday’s demonstration calling for Guelleh to step down.

The group’s leader, Ismael Guedi Hared, told the AFP news agency before the demonstration that Guelleh should leave power and called for a sustained protest movement.

“For the moment, our goal is to remove Ismael Omar Guelleh from power,” he said.

Guelleh ran without opposition in 2005. One potential challenger this year, Abdourahman Boreh, is supporting the anti-Guelleh demonstrations but currently lives in the UK.

Boreh, 51, said that if he returned to Djibouti he would be put in prison and could be tortured.

“In the wake of events like Tunisia and Egypt the president’s instinct will almost certainly lead him to violence to counter the rising confidence of the demonstrators,” Boreh told the Associated Press news agency.

“What we really want is a peaceful demonstration where the people can express their feelings for freedom, their
feelings for a democratic transition of the government, because this government has been in power for the last 34 years. The people want change.”

The number of international organisations that operate in Djibouti are sparse. One group in the country is Democracy International, which is working on a US-funded project to monitor the April vote.

The head of the group’s observation mission, Chris Hennemeyer, said anyone in Djibouti expecting the popular uprisings that Egypt and Tunisia saw will be disappointed. He said while the turnout for Friday’s rally would be low, it is “moderately significant” by Djiboutian standards.

More demonstrations happened in early February, and police used tear gas and rubber bullets to disperse a demonstration on February 5, according to Human Rights Watch.

Then, the president of the Djiboutian League of Human Rights, was arrested on February 9 after reporting on the arrests of students and members of opposition political parties following the demonstrations, according to Human Rights Watch.

The 63-year-old Guelleh has been in power since 1999 and the new constitution allows him to stand for two more six-year terms. 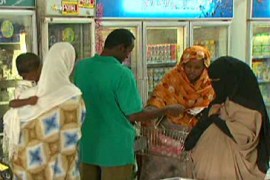 Reliance on imports pushes up the cost of basic items in the impoverished nation. 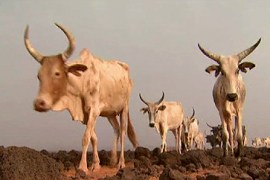 Nomads forced to the cities lack of water takes toll on tradition way of life. 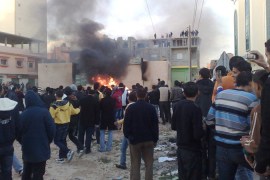 Scores of protesters killed by security forces during rallies calling for ousting of Muammar Gaddafi as unrest spreads. 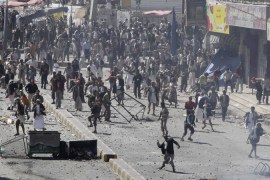 At least six people killed as tens of thousands of protesters, both pro- and anti-government, march in several cities.