Hosni Mubarak’s defiant speech announcing that he would not resign as president but transfer some powers to his deputy has failed to allay the concerns of the international community and pro-democracy Egyptians.

After meeting with his top national security team, Barack Obama, the US president, warned that the transfer of some powers from Mubarak to vice-president Omar Suleiman did not represent a credible and concrete change.

Obama added that Cairo “must spell out a clear path to democracy.”

“The Egyptian people have been told that there was a transition of authority, but it is not yet clear that this transition is immediate, meaningful or sufficient,” he said in a statement.

Echoing Obama’s position, the European Union’s foreign policy chief said Mubarak’s remarks did not allay the concerns of the Egyptian people and the international community.

In a statement, Catherine Ashton said “the time for change [in Egypt] is now”.

“President Mubarak has not yet opened the way to faster and deeper reforms,” she said, adding that the EU would continue to “engage with the Egyptian authorities to convey the need for an orderly, meaningful and lasting democratic transition”.

Also speaking after Mubarak’s speech, Nicolas Sarkozy, the French president, said the announcement was “unavoidable”, and that he hoped Egypt would establish a healthy democracy rather than a “religious dictatorship” when Mubarak eventually leaves office.

William Hague, the British foreign minister said his country was calling for “an urgent but orderly transition to a broadly-based government in Egypt”.

But he stressed that Britain did not seek to meddle in Egyptian affairs, and that “the solution to this has to be owned by the Egyptian people themselves.”

Hague said it is not clear what powers Mubarak is handing over to his deputy Suleiman.

Guido Westerwelle, the German foreign minister, said Mubarak’s speech “was not the hoped for step forward”.

However the Danish prime minister has been the only EU leader who has directly and publicly urged Mubarak to stand down since Thursday’s speech.

“Mubarak is history, Mubarak must step down,” Lars Loekke Rasmussen said in Copenhagen, the capital, on Friday.

“Ashton’s attempts to actually visit Egypt have been consistently rebuffed by the government there, who say that they are simply too busy to cope with her visit.

“And we’ve seen over the last few weeks how difficult it is for the Americans to really influence events on Egypt,” he said.

Ehud Barak, the Israeli defence minister, said it was not for foreign governments to decide what was best for Egypt.

“We should not pretend that we are more important for the Egyptian people than their own interests.  I don’t think I have to respond on this.  It’s up to the Egyptian people to find a way and do it according to their own constitution, norms and practices,” he said in comments delivered at the United Nations headquarters in New York.

Earlier in the day, Binyamin Netanyahu, the Israeli prime minister, responded to reports that Mubarak may resign by saying that he hoped whoever replaced him would uphold Egypt’s peace treaty with Israel, according to an Israeli radio report. 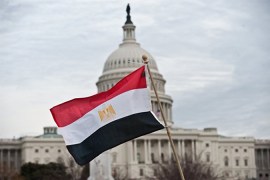