Mohamed ElBaradei, the former IAEA director, made a short appearance on Sunday night; and Ayman Nour, the head of the Ghad party, spoke the night before.

But on Monday night, there were no political heavyweights in Tahrir Square, the epicentre of the uprising, so it felt like an Egyptian “open mic night,” a chance for ordinary citizens to deliver speeches.

One speaker, Hamza, said he hoped the protests in Cairo would spread across the Arab world. He also praised Al Jazeera for its coverage of the demonstrations – leading the crowd in a chant of “Long live Al Jazeera!” – and criticised Egyptian state television for ignoring them.

Another man, Mustafa, criticised the United States for refusing to call for Egyptian president Hosni Mubarak’s ouster. He said the US and Israel were conspiring to keep Mubarak in power.

Other demonstrators turned to creative expressions.

Someone hung an effigy of Mubarak from a lamp post.

The Muslim Brotherhood, Egypt’s banned but largest political opposition group, continues to play at best a marginal role in the country’s protests.

A man named Youssef delivered a speech broadly sympathetic to the group; he called for it to be legalised and allowed to participate in the next election. But his language was otherwise identical to that of other demonstrators – and, indeed, few of the people watching him knew whether or not he actually belonged to the Brotherhood.

“I don’t mind which organisation he is from,” said one man watching Youssef speak. “I wouldn’t vote for the Brotherhood, but he’s a good speaker, so I listen.”

Al Jazeera also spoke with several people spending the night in the square in an attempt to survey a cross section of the protesters’ thoughts.

We stopped and chatted with Komy in the middle of Tahrir Square, next to a tent called “Freedom Hotel” on one of the grassy islands where Cairenes have begun setting up a camp.

Standing next to the worn-down turf and puddles of hose water, Komy said that the latest chatter among some protesters in the square concerned president Hosni Mubarak’s revamped cabinet lineup, in which the foreign and defence ministers both kept their jobs.

Komy had spent the past four nights in the square, but he returns home to 6th of October city, a suburb, during the day.

He recounted, with a smile, how Mubarak’s office manager had just appeared on Hayat, a private television channel, and said that Mubarak “never really read thoroughly” the various reports he received.

Like others, Komy’s mind was focused on Tuesday, when protesters hope to mass some one million people in and around the square.

“The president is still trying to hold on and he hired the vice-president, Omar Suleiman, because he’s the head of intelligence, and they’re playing games with people,” he said. “So they’re spreading rumours and scaring people … with the baltagiya [thugs].”

Komy said he hoped to see larger numbers of protesters in the square tomorrow but that he didn’t expect Mubarak to step down soon.

We found Mostafa – who would only give his first name and asked us to include the title “doctor” – standing by himself, regarding the scene in Tahrir Square with a sense of calm remove. Monday was Mostafa’s first time in the square, and he said he had come to “enjoy” the demonstrations.

“This is the first time in Egypt to see such things, and we wait for a long time to see such demonstrations against this old government,” he said. “This is a useless government and in many respects it is against the Egyptian needs.”

Mostafa said he believed the ongoing Tahrir Square demonstration was a “main point” in the history of Egypt.

“I think that after this demonstration and after this day the thinking of the Egyptian people will change, to ask the government for everything and demand their rights,” he said.

Though the army has, in recent days, asserted itself on the streets and explicitly promised not to harm Egyptian civilians, Mostafa wasn’t happy with the possibility that it could continue – as it has throughout the country’s modern history – control the political scene.

“I say to people, Mubarak has to go out, and we don’t need any military government,” he said.

Shabayek said she made it to Tahrir Square for the first time at 8 pm on Friday, after a long day of tear gas and bloody violence between protesters and police ended with more than 100 dead across the country, and Mubarak firing most of his cabinet. She has come every day since.

As the international media increasingly focuses its attention on this one crucial square in Cairo, Shabayek said it was important to keep the crowd large and noticeable.

“Because we’re making a statement, they have to understand that it’s not just a minority that wants Mubarak to go, it’s a majority,” she said. “I was feeling really bad each day when leaving because I knew this would be a number less.”

Most of Shabayek’s friends had gone out to protest on Friday, she said, though some with good reasons – sick parents, only child – stayed home.

The energy in the square, Shabayek said, was starting to go up. For many, Friday had exhausted their energies, and they had spent the next 48 hours manning citizen blockades in their neighbourhoods and defending their homes. But now, two days on, the fatigue had started to fade, and people were talking of a march on the presidential palace, in the upscale Heliopolis neighbourhood.

Soueif, an Egyptian who splits her time between London and Cairo, came back from a business trip in India when the unrest began.

“I think it’s wonderful. I’ve never seen anything like it.”

The country is finally finding its “spirit,” Soueif said, and the only solution that makes sense is for Mubarak and his regime to leave.

“He will stop at nothing to save himself,” she said. “I mean, they killed people here … they have discredited themselves completely.”

Like Komy, Soueif said protesters in the square have been discussing what comes next, what kind of government Egypt should have. Soueif would like to see the army protect the citizens’ desire for a change and oversee a peaceful and safe transition.

“We need a space where the country is safe, so we can form a consensus about what happens next,” she said.

Reda sat near the “Freedom Hotel” tent, quietly reading the Koran with his back leaned against a thick, folded blanket.

Echoing a theme we heard elsewhere in the square, Metwaly said that the anti-government protests had galvanised a wide cross-section of the Egyptian public.

“Now you see Muslims and Christians together, now you see old and young together, all wanting the same thing,” he said.

When we asked what might come after Mubarak, Metwaly cautioned that forcing his ouster alone would be a mammoth change; but if that happens, he said, “we can form a committee where we can choose a president.”

Metwaly also said that the violent demonstrations of the past week have also reignited Egyptians’ politically apathetic reputation.

“Everyone thought that the Egyptians were about to die, but after the recent events, we’ve proven that we are alive and that we are getting our rights and that we will prevail.”

Metwaly said that the protesters’ next step would be a march on the presidential palace, or a similarly decisive move. The destination was not as important as the display of purpose, he said. 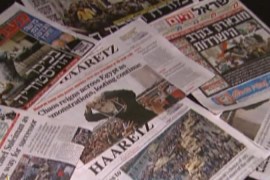 Israel hopes its three-decade-old peace treaty with Egypt will survive any change.