Renesys, a New Hampshire-based firm that monitors internet routing data in real time, said on Monday that the Noor network “started disappearing from the Internet” around 20h46 GMT.

“They are completely unavailable at present,” Renesys vice president and general manager Earl Zmijewski said in a blog post.

Attempts by the AFP news agency to access noor.net and other websites in Egypt serviced by
the company, such as the Egyptian stock exchange site at egyptse.com, were unsuccessful.

The move left the Noor Group as the only working Internet provider in the country rocked by days of protests against President Hosni Mubarak.

Mobile telephone networks have also been severely disrupted in Egypt along with the Internet.

Activists have used mobile phones and the internet to organise the most serious anti-government demonstrations in decades, protests inspired by the uprising in Tunisia.

Google, in response to the Internet blockade in Egypt, said on Monday that it had created a way to post messages to microblogging service Twitter by making telephone calls.

Google worked with Twitter and freshly acquired SayNow, a startup specialising in social online voice platforms, to make it possible for anyone to “tweet” by leaving a message at any of three telephone numbers.

“Like many people we’ve been glued to the news unfolding in Egypt and thinking of what we could do to help people on the ground,” Google product manager Abdel-Karim Mardini and SayNow co-founder Ujjwal Singh said in a blog post.

“Over the weekend we came up with the idea of a speak-to-tweet service – the ability for anyone to tweet using just a voice connection,” they said.

Twitter hashtags are intended as search terms so people can more easily find comments related to particular topics or events.

People can call the same numbers to listen to messages or hear them online at twitter.com/speak2tweet.

“We hope that this will go some way to helping people in Egypt stay connected at this very difficult time,” said Singh and Mardini. “Our thoughts are with everyone there.”

Google, meanwhile, declined to comment on reports that one of its Egypt-based marketing executives, Wael Ghonim, has been missing since late Friday.

“We care deeply about the safety of our employees, but to protect their privacy, we don’t comment on them individually,” a spokesman for the California Internet giant said in an email response to an AFP inquiry. 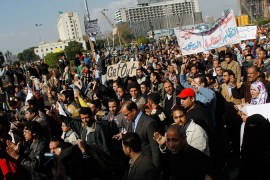 Egypt gears up for gigantic protest

Organisers plan “million-man-march” on Tuesday in a bid to oust president Mubarak while the army vows not to use force.