Nearly 80 people have been killed in the central Syrian city of Homs following a series of kidnappings that began on Sunday, activists have said.

Activists and residents of several neighbourhoods said Sunni residents had been kidnapped by “shabiha,” armed, mostly Alawite gangs that support the government.

An Alawite human rights activists, however, told Al Jazeera’s Rula Amin that there were killings and kidnappings on both sides of the divide, with people too afraid to leave their homes.

“Mad gangs have taken hold of the streets,” the activist, who did not want to be named, said.

Al Jazeera’s Nisreen El-Shamayleh, reporting from neighbouring Jordan, said activists reported on Monday that at least 79 civilians representing both the Alawite and Sunni sects had been killed in Homs.

“What this highlights is the fact that there are growing sectarian tensions and the emergence of an armed insurgency among civilians in Syria who are taking up arms,” she said.

“Representatives from the Syrian opposition are very reluctant to acknowledge that this is indeed happening.

“But according to residents of Homs and activists in general, they are saying there is more of this that has been happening.

“It’s not just kidnappings and killings. There has been large displacement of families in some areas where Sunnis would kick out Alawite families and vice versa. So sectarian tensions in Syria are running very high.”

In addition to the kidnappings, the opposition Syrian Revolution General Commission said on Tuesday that 25 people had been shot dead by security forces in Homs and elsewhere.

The group said 23 people were killed in Homs, while one person died in Hama and another in Idlib.

President Bashar al-Assad and the ruling elite are mostly Alawite, an offshoot of Shia Islam, while the majority of the country is Sunni.

Protests against Assad that began in March have escalated into an armed conflict between the government and its armed supporters on one side, and civilians and defected soldiers on the other.

An activist in the Zahraa district told the London-based Syrian Observatory for Human Rights that shabiha had kidnapped and killed at least 34 people from districts of Homs known to oppose Assad.

Many of the city’s neighbourhoods came under heavy assault from early on Monday morning, the observatory said.

The Syrian government blames armed groups for fuelling the unrest and said on Tuesday that it had foiled an operation by 35 gunmen to enter its country from Turkey.

US ambassador to return

The renewed violence came as US officials announced that Robert Ford, the US ambassador to Syria, would return to Damascus, six weeks after he was recalled due to threats to his safety.

“Ambassador Robert Ford has completed his consultations in Washington and is returning to Damascus this evening,” a senior US State Department official told reporters on Tuesday.

Meanwhile in Geneva, Hillary Clinton, the US secretary of state, held a rare meeting with Syrian opposition members for talks on the political situation in Syria.

“Obviously, a democratic transition is more than removing the Assad regime. It means setting Syria on the path of the rule of law,” Clinton told the activists.

“The Syrian opposition, as represented here, recognises that Syria’s minorities have legitimate questions and concerns about their future, and that they need to be assured that Syria will be better off under a regime of tolerance and freedom that provides opportunity and respect and dignity on the basis of the consent rather than on the whims of a dictator.”

The seven opposition figures are exiles in Europe and belong to the opposition Syrian National Council. 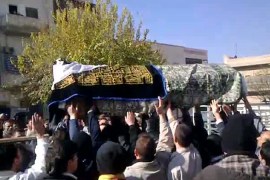 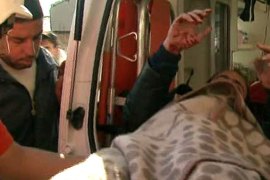 Porous border enables families living along it to leave their homes in search of safety.