One of the world’s leading credit-rating agencies has said that it may carry out an unprecedented mass downgrade of European countries if regional leaders fail to reach an agreement on how to solve the debt crisis in a summit later this week.

The ratings agency Standard & Poor’s on Monday placed the ratings of 15 eurozone countries, including Germany and France which had the top AAA-status, on “credit watch negative,” meaning they could be downgraded within three months.

However, S&P said that it expected to conclude its review “as soon as possible” following a European Union summit which begins on Thursday at which leaders will discuss plans, drawn up by France and Germany on Monday, to tackle the eurozone crisis.

In a joint statement following the announcement, France and Germany, the eurozone’s two largest economies, said: “Germany and France reaffirm that the proposals they made jointly today will reinforce the governance of the euro area in order to foster stability, competitiveness and growth.

“France and Germany, in full solidarity, confirm their determination to take all the necessary measures, in liaison with their partners and the European institutions to ensure the stability of the euro area.”

Speaking in Berlin on Tuesday, US Treasury Secretary Timothy Geithner said that the world was watching Europe as it seeks an end to the eurozone crisis, but acknowledged the US had its own problems to solve.

“I just want to say that although the eyes of the world are very much on Europe now, as an American, I want to make it clear that we face very challenging economic challenges in the US still. We have a lot of work ahead of us.”

Jean-Claude Juncker, chairman of the 17 eurozone finance ministers, said he was “astonished” by S&P’s announcement.

He described it as “a wild exaggeration and also unfair” and said it failed to take into account a new austerity plan for Italy, which pulled borrowing costs for the biggest of the eurozone’s ailing countries back from the brink.

The governor of the Bank of France, Christian Noyer, was also critical.

“When you look at how Standard & Poor’s argues its point, you can see that the methodology has evolved and is now more linked to political factors than to economic fundamentals,” he told a gathering near Paris.

German Chancellor Angela Merkel appeared to play down the S&P warning, saying: “What a ratings agency does is its own responsibility.

But she pledged that eurozone leaders would take decisions at this week’s conference to restore confidence.

“We have a trajectory for revising our public deficits that we will stick to,” he said.

Agnes Crane, a financial columnist for the Reuters news agency in New York, told Al Jazeera that the move by S&P was a warning to the eurozone to solve their economic problems fast.

“To put this in context, the S&P warning is essentially trying to add some urgency to something that we all recognise as urgent”, Crane said.

Martin Hennecke, the associate director of the Tyche Group, an independent investment and financial advisory firm in Hong Kong, told Al Jazeera the forecast downgrade came as no surprise.

He explained that as early as 2005, the ratings agency issued a projection warning that France, Germany and the UK were headed towards possible junk status and default.

“It’s not just losing the AAA, but actually down the road, they said we may see the national bankruptcies of Germany and France.”

S&P said it would conclude its review after the EU summit, making clear that it wanted to see political as well as financial solutions.

It highlighted “continuing disagreements among European policy makers on how to tackle the immediate market confidence crisis and, longer term, how to ensure greater economic, financial, and fiscal convergence among eurozone members”.

Of the 17 countries in the eurozone, Cyprus’ rating had already been put on credit watch negative by S&P, and Greece is rated double-C, which already denotes a high chance for default in the near term.

If the downgrade materialises, countries such as Austria, Belgium, Finland, Germany, Netherlands, and Luxembourg would likely have their rating cut by one notch. Other countries could suffer downgrades of up to two notches, S&P said.

The other two major rating agencies, Moody’s and Fitch, have already said they could soon review the ratings of top-rated eurozone countries, but they still maintain a stable outlook on them. 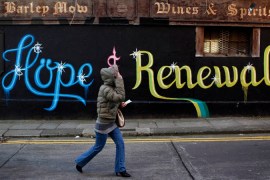 Government outlines cutbacks to welfare and other departments as part of PM pledge to restore “economic sovereignty”.