A man in southern China has died of bird flu, in the country’s first reported case of the disease being contracted by a human in 18 months.

The 39-year-old bus driver was admitted to hospital on December 25, the official Xinhua news agency reported, and died on Saturday in Shenzhen, just across the border from Hong Kong.

He died of multiple organ failure in the early morning, having tested positive for the H5N1 virus, the report said.

The victim had had no direct contact with poultry in the month prior to when he first reported symptoms and had not left the city.

The official newspaper in Guangdong province, where the man lived, said that 120 people who had had contact with the man had shown no signs of having contracted the disease.

Hong Kong recently culled 17,000 chickens at a wholesale poultry market and suspended all live chicken imports for 21 days after a dead chicken tested positive for the H5N1 virus there.

The virus is normally found in birds, but it can jump to people who do not have immunity to it.

Researchers worry that it could mutate into a form that would ease its spread and cause millions of potential infections.

In recent years, the virus has become active in various parts of the world, mainly in East Asia, during the cooler months.

Authorities in China are particularly worried about the spread of infectious diseases at this time of the year, as millions of citizens pack into crowded buses and trains around the country to go home to celebrate the lunar new year.

The current strain of H5N1 is highly pathogenic, killing most species of birds and up to 60 per cent of the people it infects.

The virus also kills migratory birds, but species that survive it can carry and disperse the virus to new, uninfected locations.

H5N1 transmits less easily between people, but there have been reports of clusters of infections in people in Indonesia and Thailand in the past. 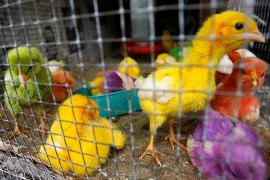 Food agency says new strain of H5N1 avian flu is spreading in Asia and may breach defences of existing vaccines. 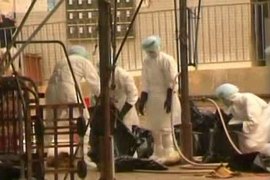