Russian military prosecutors have launched an investigation into whether safety regulations were breached, following a massive fire that started aboard a docked Russian nuclear submarine.

In a sign of the gravity of the incident, President Dmitry Medvedev dispatched Russia’s military chief of staff Nikolai Makarov to the scene, the Kremlin said on Friday.

Russia’s Investigative Committee said it had opened a criminal enquiry into damage of military property by negligence. Medvedev summoned top cabinet officials to report on the situation and demanded punishment for anyone found responsible.

Firefighters extinguished the fire on Friday after a nearly day-long blaze raised concerns about the security of the fleet. Authorities assured the public that there was no radiation leak and that the vessel’s nuclear-tipped missiles were not on board.

The fire broke out on Thursday at an Arctic shipyard outside the northwestern Russian city of Murmansk where the submarine Yekaterinburg was in a dry-dock on a wooden scaffolding and then engulfed the sub’s outer hull Russia’s military said.

The blaze, which shot orange flames high into the air through the night, was put out but firefighters continued to spray the vessel with water to cool it down.

Russian state television earlier showed the rubber-coated hull of the submarine still smoldering, with firefighters gathering around it and some standing on top to douse it with water.

An unspecified number of crew remained inside the submarine during the fire, a defence ministry spokesman said in a statement.

The spokesman said there was never any danger of the fire spreading inside the submarine and said the crew reported that the conditions on board remained normal.

There has been no radiation leak from the blaze, the defence and foreign ministries said, and Norway’s Radiation Protection Authority across the border reported it had not measured any increased radioactivity.

The vessel’s nuclear reactor had been shut down and its nuclear-tipped missiles and other weapons had been unloaded before repairs, it said.

Toxic fumes from the blaze had spread to the town of Roslyakovo where the shipyard is located, but officials said there was no need to evacuate local residents. 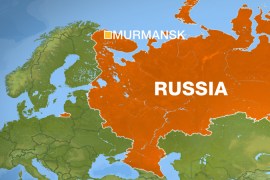 Officials say no threat of radiation or munitions explosions from vessel that burned at Murmansk dock. 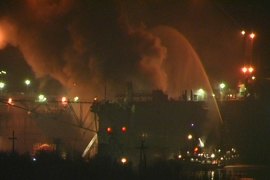 Submarine under repair catches fire but officials say all weapons removed and there was no radiation risk.