Turnout in the first round of voting in Egypt’s parliamentary elections reached 62 per cent, elections officials said.

“This is the highest turnout in Egypt’s history since pharaonic times until now,” Abdel Moez Ibrahim, the head of Egypt’s Elections High Comission, said on Friday.

More than eight million voters cast ballots in Monday and Tuesday’s vote, the first of three rounds for the lower house. Another three subsequent rounds lasting until March will elect the less powerful upper house.

The figure for voting in a third of the country’s provinces was lower than an estimate from Egypt’s ruling military leadership of 70 per cent given earlier this week.

Al Jazeera’s Sherine Tadros, reporting from the Egyptian capital, said: “Sixty-two per cent of voter turnout, that is about 8.5 million people that voted this week.

“As soon as that figure [was announced] everyone that was in attendance at the press conference started cheering and clapping.”

Under the highly complex system being used, voters were required to submit three votes: two for individual candidates and one for a party.

Ibrahim gave a number of results for the individual contests, the vast majority of which will go into a runoff on Monday because no candidate gained an outright majority.

As he began to announce the party results – expected to give the broader voting trend – Ibrahim brought the press conference to an abrupt end.

“I have no more energy, I’ve run out of gas,” he told a press conference, before instructing reporters to look through the voluminous results themselves, which he said would be made available.

The turnout was far higher than the 40 per cent seen for a referendum on a constitutional amendment held in March.

Egyptians cast their ballots in nine of the country’s 27 provinces, meaning 17.5 million citizens have so far had the chance to cast votes.

High turnout has led to the announcement of results being pushed back twice, as election workers needed more time to count all the ballots, officials said.

Partial figures appeared to confirm predictions that Islamist parties would win at least two thirds of the ballots cast.

The Freedom and Justice Party, the political arm of Egypt’s influential Muslim Brotherhood, is expected to make the biggest gains in the polls, according to non-official estimates.

They are expected to be followed by Al-Nour, an ultraconservative Salafi party, while the liberal Egyptian Bloc will likely rank third.

According to independent daily Al-Masri Al-Yum, no women were elected in the first round.

Nihal Aahdi, a female candidate for the liberal Wafd party, told the paper that the failure of women candidates was because “religious parties dominate Egyptian society and the Muslim Brotherhood and Salafists dominated the results.” 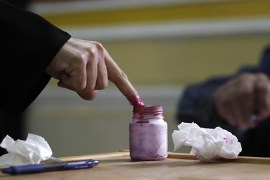 Explainer: Why are the elections significant?

Egyptians head to the polls to embrace democracy following years under a virtual dictatorship. 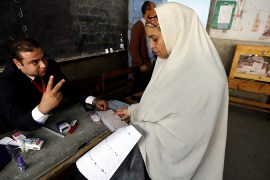 Egyptian elections mark break with the past

Turnout in historic vote estimated at about 70 per cent, though some doubt the military’s role in overseeing vote.