A suicide bombing in the Iraqi capital’s Green Zone earlier this week may have been an attempt to kill Prime Minister Nouri al-Maliki or some other senior political leader, officials say.

Two parliamentary guards were killed in Monday’s blast, which officials initially said was caused by a mortar round. Two other people, including the parliamentary speaker, were injured.

Major-General Qassim al-Moussawi, the Baghdad military spokesperson said on Friday that new intelligence pointed to an assassination attempt but that the investigation was still ongoing.

Moussawi said the bomber was driving a black, four-wheel drive vehicle carrying 20kg of explosives and tried to join a convoy of other vehicles going into the parliament grounds in the heavily protected district housing government offices and embassies.

Moussawi said the new information was based on confessions from members of what he called a terrorist group.

Meanwhile, rioters set on alcohol stores, a massage parlour and hotels after being provoked by fiery sermons in a predominantly Kurdish city in north Iraq, police officials said on Saturday.

Thirty people, including 20 policemen, were reported injured in the rampage, which followed Friday midday prayers in the town of Zakho, some 475km northwest of Baghdad. Zakho lies within the territory controlled by Iraq’s Kurdistan regional government.

In all 30 alcohol stores, four hotels, and a massage parlour in and around the city near the Turkish border were ransacked, set on fire or otherwise damaged, they said.

The officials spoke on condition of anonymity, as they were not authorised to speak to the media.

Angry crowds then attacked offices belonging to a Kurdistan-based Islamist party in retaliation, officials said. Six headquarters of the Kurdistan Islamic Union in and around Zakho, and in the nearby city of Dohuk, were set on fire or otherwise assaulted, said Zakho police officer Ahmed Doski.

Islamic Union activist Salahudden Babekir blamed the attacks on his party on activists of the ruling Kurdistan Democratic Party, and denied that his group had any role in Friday’s violence. 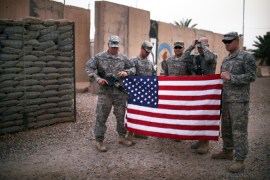 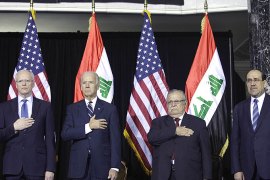 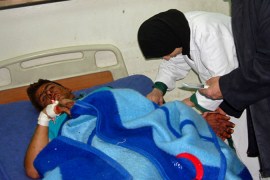