A Beijing court has failed to reach a verdict in the trial of Chinese activist and her husband on charges of “inciting a disturbance” for defending farmers who had their land confiscated.

Ni Yulan and Dong Jiqin were detained in April as authorities rounded up scores of activists amid anonymous online calls for protests similar to those that swept across the Arab world.

The four-hour trial was closed to the press and foreign diplomats who tried to enter the courthouse in western Beijing.

The couple were charged with “picking quarrels, provoking trouble and willfully destroying private and public property as well as abusing other people repeatedly in aggravated circumstances”, a court spokesman said.

The couple’s lawyer Cheng Hai told journalists outside the courthouse that Ni, 51, and Dong pleaded not guilty to the charges, and that no verdict had been reached.

It was unclear when the court would announce a verdict, he said, as police officers tried to escort him away amid a strong security presence.

Al Jazeera’s Steve Chao commenting on why no verdict was issued said: “It’s hard to fully understand the decision making of the court due to the ‘great wall’ that prevents much information from coming out.

“Though it may also have to do with the timing of the case and the fact that Premier Wen Jiao Bao most recently called for farmers’ land rights to be respected. This of course, was what Ni Yulan was often fighting for and no court would want to be seen to challenging Wen.”

Amnesty International has called for authorities to release the couple. According to the rights group, Ni’s knee caps and feet were broken when she was detained in 2002, and she has been confined to a wheelchair ever since.

“The Chinese authorities have made Ni Yulan’s life unbearable, subjecting her to detention and beatings that have left her unable to walk,” Sam Zarifi, Amnesty International Asia-Pacific director, said in a statement.

Ni spent much of the trial lying on a bed in the courtroom due to her poor health, Cheng said. The couple’s daughter, Dong Xuan, testified on behalf of her parents, he added.

“At first when I saw my parents I was very happy, but seeing my mother lying on the bed made me feel bad,” she told reporters.

Dong, believed to be in her late 20s, had not been allowed to see her parents since they were detained.

“She [Ni] has been detained for such a long time, you can see all the police that are here and it has been a very abnormal legal process, so I believe there is a very big chance she will be found guilty,” their daughter said.

According to the court spokesman, who refused to be named, Ni has also been charged with fraud and “fabricating facts”.

In recent months more cases of activists being targeted by government officials are making international headlines but that is not the case within the country.

Our correspondent said: “It wouldn’t be a surprise if most people in China never heard of Ni Yulan. International media was present outside the courts, but anyone who tried to speak to them was taken away and in some cases even ‘dragged’ away.

“Hence, the authorities make it very difficult for the international free press to cover such cases.”

Ni and Dong have provided legal assistance to numerous families around China who have been forcibly evicted from their homes in government-backed land requisitions.

Their battle to oppose the land grabs began in 2001 after their courtyard home in central Beijing was requisitioned and marked for demolition.

One village in southern China, Wukan, recently revolted against bureaucracy in protest at years of illegal land grabs by local Communist leaders. Talks with a senior official defused the standoff last week.

Thursday’s trial came after a court in southwest China’s Guizhou province Monday sentenced veteran activist Chen Xi, who was involved in the 1989 Tiananmen democracy protest movement, to 10 years in jail for subversion.

Another veteran dissident, Chen Wei, was jailed for nine years in Sichuan province on Friday, also for subversion.

The charge of subversion is often used to put away government critics – Nobel Peace Prize winner Liu Xiaobo was convicted on the same charge in 2009 and sentenced to 11 years in prison.

Trained as a lawyer, Ni was sentenced to a year in jail in 2002 for “obstructing official business” and for two years in 2008 for “harming public property”, charges brought against her as she tried to protect her home.

She was also disbarred in 2002. The couple say they have not been compensated for the loss of their home. 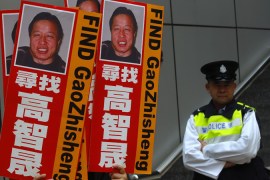 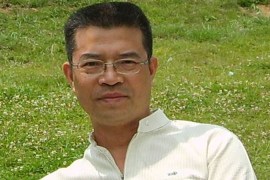 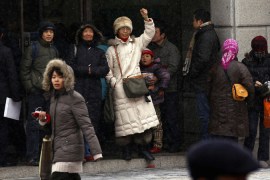 Ni Yulan, who does defence work for people forced from their homes, and her husband charged with causing disturbance.