An army official in Guinea-Bissau has said there was a failed coup attempt, while the ill president of the West African country undergoes medical treatment abroad.

Residents said automatic weapons and rocket fire could be heard at the Santa Luzia army base in the capital Bissau but no casualties have been reported.

“Apparently, it is friction between the army chief and the head of the navy,” a Bissau-based diplomat said. “The prime minister has sought refuge in a foreign embassy.”

The army chief of staff told a news conference on Monday that the army and the government of Prime Minister Carlos Gomes Junior were in control of the situation.

A Guinea-Bissau security source said the fighting broke out after the army chief of staff was arrested on the orders of the head of the navy, but was later freed by his troops.

Army chief Antonio Indjai said authorities had arrested Natchuto Bubo, the navy chief, in connection with the incident but Tchuto denied any knowledge of an order to arrest the chief of staff.

“For a week now, I have been spending nights at my home, not at the barracks. I was informed of the situation, I had no idea what is going on,” Tchuto told journalists.

Top officials met on Monday evening to discuss the situation.

President Malam Bacai Sanha has been undergoing medical treatment in a Paris hospital since November, though France’s foreign ministry declined to say whether he was still in France.

Since independence from Portugal in 1974, Guinea-Bissau has been beset by a series of coups, military revolts and political assassinations.

The country’s former president, Joao Bernardo “Nino” Vieira, was assassinated on March 2, 2009, hours after the head of the army was killed in a bomb explosion.

Less than a year later, mutinous soldiers seized the head of the armed forces and placed the prime minister under house arrest in an apparent coup attempt.

International drug trafficking networks have also taken advantage of the weak government and corruption to turn the country, whose main legal export is cashew nuts, into one of West Africa’s transit points for Latin American cocaine headed to Europe.

The nation sits at the bottom of most economic and health indices, as the majority of people live without electricity or clean running water.

There are few job opportunities for young people and the average life expectancy is just 46 years. 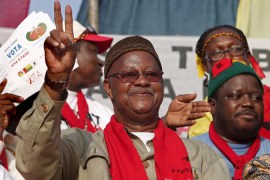 Fugitive Libyan leader to be ‘welcomed with open arms’ if he takes refuge in his allied west African nation. 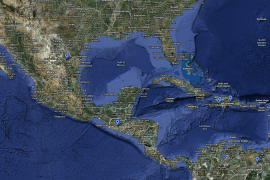