The summer riots across London and other English cities led politicians to open a discussion about “broken Britain”.

Some blamed police harassment of young people for starting the unrest. Others claimed society had lost its moral compass, leading to wonton criminality and looting.

Initially sparked by the police killing of Mark Duggan in the Tottenham neighbourhood, in what some saw as an example of institutionalised racism, the riots quickly spread across England. They caused at least $326m in property damage.

According to research from the Guardian newspaper and the London School of Economics, the riots were caused by widespread anger and frustration at the way police forces had been engaging with local communities.

The British historian David Starkey blamed “black culture” for the riots. But more than 2,800 arrests across the country issued in the wake of broken windows and charred buildings showed there was a diverse group of rioters who were mostly united by their lower class social backgrounds, rather than race.

Many felons conceded that their involvement in organised looting bouts was based on opportunism; a chance to acquire luxury goods that they couldn’t otherwise afford.

In cities like Manchester and Leicester, BlackBerry phones, and their free BBM messaging services were used to communicate and plan looting sprees in advance, underscoring the importance of social media for organising both peaceful and violent demonstrations in 2011.

Riots showed the world that developed countries like the United Kingdom often face economic and social problems which have been left unaddressed.

Three of the areas in London affected by the riots were included on a list of Britain’s highest unemployed areas, according to the Trade Union Congress (TUC).

Haringey, Hackney and Lewisham which saw some of the worst rioting and looting are also deprived communities.

David Cameron, the UK prime minister, has pledged that the government will intervene to help 120,000 of the country’s most troubled families.

According to the British Labour Party leader Ed Miliband, the riots were a reflection of MPs’ expenses scandal, banking crisis and phone hacking.

Debates about the causes of violent unrest in one of the world’s most developed countries will continue through 2012. 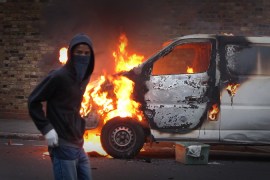 This film deconstructs five days in August when England burned and asks whether it has now emerged from the ashes. 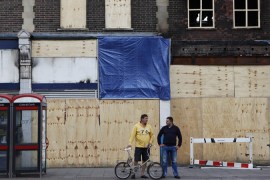 Recent riots may have given Tottenham a bad reputation, but one art project has helped unite the community. 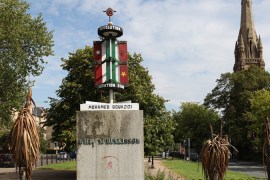 From the Arab Spring to Liverpool?

The UK riots have unique roots, but British youths’ alienation is similar to the disenfranchisement behind Arab revolts. 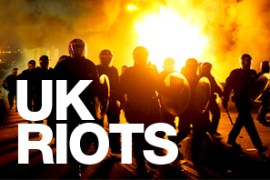 We bring you the latest in the aftermath of the riots that spread to numerous English cities and shook the country.