The United Nations and the Iraqi government have agreed to relocate several thousand Iranian exiles living in a camp in northeastern Iraq, potentially averting a showdown with its residents.

The dissidents, who have not said whether they would agree to move, reported a rocket attack on the camp.

The People’s Mujahedeen Organisation of Iran, one-time allies of Saddam Hussein in a common fight against Iran, said Katyusha rockets struck near housing units inside the camp on Sunday night, but did not report any casualties.

A representative of the camp’s residents said on Monday they were still waiting to see the agreement before commenting on whether they would decide to relocate or not.

Since Saddam’s overthrow, Iraq’s new leaders have improved relations with Iran and have sought to shut down the camp, home to 3,400 residents and located in barren terrain in Diyala province, about 80km from the Iranian border.

The UN reported that at least 34 people were killed in a raid by Iraqi government forces in April.

The United Nations Assistance Mission for Iraq announced an agreement on Sunday night that establishes a process to move the residents of Camp Ashraf to a temporary location. It did not give a timeline for the move or specify the new location.

A statement from Hillary Clinton, the US secretary of state, said the residents would be moved to Camp Liberty, a former US military base near the Baghdad international airport.

At Camp Liberty, the UN’s refugee agency will interview the residents to determine their eligibility to get refugee status, before they can eventually be resettled in third countries, Clinton said.

“We are encouraged by the Iraqi government’s willingness to commit to this plan, and expect it to fulfil all its responsibilities,” she said in the statement.

“To be successful, this resettlement must also have the full support of the camp’s residents, and we urge them to work with the UN to implement this relocation.”

The People’s Mujahedeen Organisation of Iran first moved to Camp Ashraf during the rule of Saddam, who saw the group as a convenient ally against Iran. The group is committed to the overthrow of Iran’s rulers.

The group carried out a series of bombings and assassinations against the Islamic republic in the 1980s and fought alongside Saddam’s forces in the Iran-Iraq war. But the group says it renounced violence in 2001. US soldiers disarmed them during the invasion of Iraq in 2003.

Nouri al-Maliki, the prime minister, has been determined to close down the camp by the end of December. His government considers the camp as an affront to Iraq’s sovereignty.

Last week, an Iraqi government spokesperson said the government was working out a solution to the situation at Camp Ashraf with the UN and would allow the camp to stay open into January as residents are being relocated. At the time, representatives of the residents suggested they would be willing to move, as long as their security was provided for.

Under the agreement outlined by the UN, the international organisation will monitor the relocation process and then a team from the UN’s refugee agency will be deployed at the new location to process the refugee claims.

Ban Ki-moon, the UN secretary-general, “believes that the agreement lays the foundation for a peaceful and durable solution to the situation, respecting both the sovereignty of Iraq and its international humanitarian and human rights obligations”, according to a statement released by his spokesperson.

“The secretary-general reminds all concerned that any violence or attempt at a forcible solution would be unacceptable,” the statement said.

Officials from the US embassy in Baghdad will also visit regularly, the state department said.

The Iraqi government will be responsible for the exiles’ safety during that time, and will have a liaison officer from the human rights ministry involved in the relocation, the UN said.

“I would like to highlight that the government is exclusively responsible for the safety and security of the residents both during their transfer and in the new location until they leave the country,” Martin Kobler, the Special Representative of the United Nations secretary-general for Iraq, said. 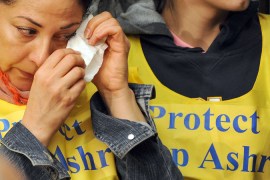 At least 25 killed and scores wounded at Camp Ashraf, prompting calls for restraint from visiting US defence secretary.