A court in Ethiopia has sentenced two Swedish journalists to 11 years in prison for supporting terrorism and entering the country illegally.

Judge Shemsu Sirgaga ruled on Tuesday that the freelance reporters – Johan Persson and Martin Schibbye –  should be sentenced to 11 years each of “rigorous imprisonment”.

“This sentence should satisfy the goal of peace and security,” he said.

The two were found guilty last week of of helping and promoting an outlawed ethnic Somali rebel group with which they entered Ethiopia.

They were arrested in the Ogaden region on July 1 during clashes between Ethiopian forces and fighters of the separatist Ogaden National Liberation Front (ONLF).

The Swedish Union of Journalists (SJF) condemned the sentence as politically motivated and called on Sweden’s government to intervene.

“It is obvious that this is a political sentence,” SJF president Jonas Nordling said in a statement.

“Now the Swedish government has the heavy responsibility of resolving this at the political level … The government must show that Sweden is doing everything possible to support and defend freedom of the press.”

The Ethiopian government has blacklisted the ONLF as a terrorist group, and recently adopted legislation outlawing promotion of the group’s activities.

Ogaden area is off limits to foreigners and the duo entered Ethiopia from Somalia without visas. They admitted contact with ONLF but rejected accusations that they received weapons training.

The journalists’ lawyer said his clients were weighing the option of an appeal, but that for now there was no talk of pleading for clemency.

“We are only talking about the possibility of appealing for the time being, which follows judicial procedure,” Sileshi Ketsela, the defence lawyer, told the Reuters news agency.

Swedish authorities have maintained that the two were in the country on a journalistic mission. 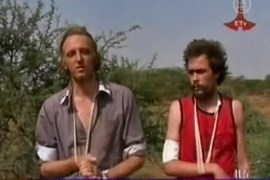