Dozens of people have been killed during several days of fighting in northeast Nigeria between security forces and a Muslim sect responsible for a series of increasingly bloody attacks in the country, authorities said.

The fighting, between suspected members of Boko Haram and a joint task force of police and military, left residents cowering in their homes amid gunfire and explosions on Saturday. The violence began on Thursday in Borno and Yobe states in Nigeria’s arid northeast corner bordering Cameroon, Chad and Niger.

At least 50 people have died in Damaturu and Potiskum in Yobe state during the fighting, local police commissioner Lawan Tanko told The Associated Press on Saturday.

In Maiduguri, the capital of Borno state, a mortuary official who requested anonymity because of the sensitivity of the matter told the AP at least 11 bodies had been brought in from the fighting.

The violence left at least two senior police officers dead in Yobe state, while a military spokesman in Borno said three churches had been bombed during attacks there.

Police and a local rights group have said the death toll could reach 100.

“From reports I have been receiving from Damaturu, up to 100 people could have been killed,” a senior police source in  the region told the AFP news agency, while Chidi Odinkalu, head of the Open Society Justice Initiative, gave a figure of 69-100.

A Damaturu resident on Thursday said it appeared that suspected members of Boko Haram were in the streets shooting and setting off explosions at random. Residents in Maiduguri said people were fleeing and one of six explosions there had shattered the windows of a mosque in an office complex.

Speaking to AFP, Abul Qaqa, a purported spokesman for Boko Haram, said: “We are responsible for the attacks in Maiduguri, Damaturu and Potiskum. We carried out the attacks to avenge the killings of our brothers by the security forces in 2009. We will continue to wage war against the Nigerian state until we abolish the secular system and establish an Islamic state.” 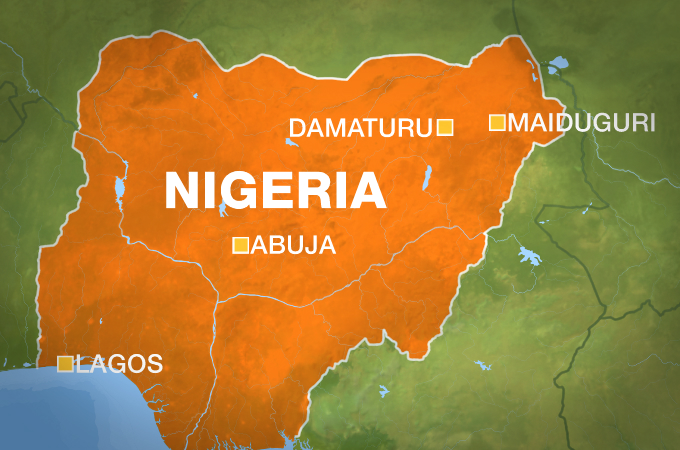 Boko Haram, which means “Western education is sacrilege”,  has carried out a succession of recent attacks in the country against Nigeria’s weak central government.

The group wants the strict implementation of Islamic law across the nation of more than 160 million people, home to both Christians and Muslims.

Maiduguri has borne the brunt of the violence attributed to Boko Haram, which has claimed responsibility for scores of attacks in the north as well as the August suicide bombing of UN headquarters in the capital Abuja that killed at least 24.

A military task force has been deployed in Maiduguri in a bid to stop the sect, but it has in turn been accused of major abuses, including shooting civilians and burning their homes in the wake of bomb attacks.

In Yobe state, the fighting became so intense that the military ordered those living in a neighborhood surrounding Damaturu’s central mosque to evacuate. After a deadline, soldiers riding in armoured personnel carriers and tanks drove into the neighborhood shooting, Tanko said.

“We were able to kill 12 of the Boko Haram armed sect and bombers,” Tanko told the AP. The police commissioner said officers also recovered Kalashnikov rifles, ammunition and explosives.

Little is known about the sources of Boko Haram’s support, though its members recently began carrying out a wave of bank robberies in the north. Police stations also have been bombed and officers killed.

Boko Haram has splintered into three factions, with one wing increasingly willing to kill as it maintains contact with terror groups in North Africa and Somalia, diplomats and security sources say.

The sect is responsible for more than 450 killings in Nigeria this year alone, according to an AP count.