Pope Benedict XVI has called for an end to violence in Syria and for resumption of peace talks in the Middle East in his Christmas Day message.

“May the Lord come to the aid of our world torn by so many conflicts which even today stain the earth with blood,” he said, speaking in Italian from the central balcony of St Peter’s Basilica in the Vatican on Sunday.

“May the Prince of Peace grant peace and stability to that Land where he chose to come into the world, and encourage the resumption of dialogue between Israelis and Palestinians. May he bring an end to the violence in Syria, where so much blood has already been shed,” the leader of the world’s 1.3 billion Roman Catholics said during his “Urbi et Orbi” (to the city and the world) message.

He also called for people to lend aid to those suffering from hunger, food shortages or displacement in eastern Africa and natural disaster affected areas of southeast Asia.

The pope’s message of peace on Christmas was marred by a series of bombings targetting churches in Nigeria on Sunday, which killed least 25 people. A Vatican statement condemned the attacks as “terrorist violence”.

During an earlier address at Christmas Eve Mass, the pope decried the increasing commercialisation of Christmas, urging the faithful to rediscover the real significance of the humble birth of Jesus.

“Today Christmas has become a commercial celebration, whose bright lights hide the mystery of God’s humility, which in turn calls us to humility and simplicity,” he said on Saturday in his homily to about 10,000 people in the basilica.

The pontiff urged the world’s billion-plus Roman Catholics to look beyond the holiday’s “superficial glitter” to discover its true meaning.

“Let us ask the Lord to help us see through the superficial glitter of this season, and to discover behind it the child in the stable in Bethlehem, so as to find true joy and true light.”

The 84-year-old pope, celebrating the seventh Christmas season of his pontificate, also urged that those marking the holiday in poverty, suffering or far from home not be forgotten.

“Let us strip away our fixation on what is material, on what can be measured and grasped. Let us allow ourselves to be made simple by the God who reveals himself to the simple of heart,” he said as millions watched him on television throughout the world.

At the start of a Christmas Eve service, he was wheeled up the central aisle of St Peter’s Basilica standing on a mobile platform which he has been using since October.

He also issued a scathing rebuke against “oppressors” and warmongers around the world saying Christ would be victorious over them.

“God has appeared: as a child. It is in this guise that he pits himself against all violence and brings a message that is peace,” he said.

It was the second time in as many days that Benedict has pointed to the need to rediscover faith to confront the problems facing the world today.

In his end-of-year meeting with Vatican officials on Thursday, Benedict said Europe’s financial crisis was largely “based on the ethical crisis looming over the Old Continent”. 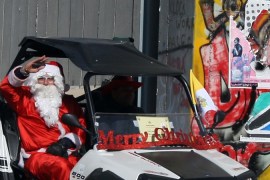 In Pictures: Christmas in the Middle East

Christians in the Arab world celebrate the birth of Jesus Christ after year of unprecedented political upheaval. 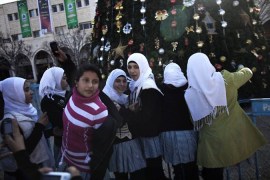 Crowds flock to Bethlehem for Christmas

Thousands converge in occupied West Bank city to celebrate the birth of Jesus following a year of political upheaval. 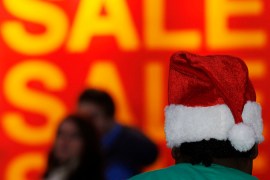 Europeans brace for an ‘austerity’ Christmas