Haiti’s parliament has passed a vote of confidence in the new government’s legislative programme a day after it gained the backing of senators in the disaster-hit nation.

The vote, which approves Garry Conille’s appointment as prime minister, was reached after more than 14 hours of debate on Saturday, with 81 members in favor, none against, and seven abstentions.

Conille, a 45-year-old physician, was the third prime ministerial candidate put forward by Michel Martelly, the Haitian president, for the post in a bid to end a three-month impasse over the makeup of his fledgling government.

“We wish you good luck but this is not a blank check,” speaker of the House Saurel Jacinthe told Conille, a former advisor to Bill Clinton, the former US president.

Conille was confirmed by Haiti’s Senate on October 4.

“Thank you very much for the trust you have placed in me,” said Conille, whose programme is primarily focused on tackling a housing crisis in the wake of last year’s catastrophic earthquake.

Meanwhile, Martelly sought to promote his country as a destination for foreign investment more than for humanitarian aid.

“We do not want you to give us money; we want investments … we want effective external support for sustainable development,” Martelly said to his Dominican counterpart, Leonel Fernandez at a forum promoting co-operation between Europe and Latin America.

Martelly said his government was working to “strengthen peace” in the wake of a devastating January 2010 earthquake that was followed by a cholera outbreak and political unrest.

Haiti, he added, is “ready for investment.”

Martelly, who took office on May 14, also said his government would work to promote cultural and tourist attractions in his country, including its beaches, natural resources, history and voodoo religion.

The Dominican Republic and Haiti share the island of Hispaniola. 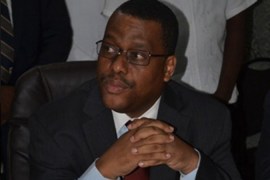 Gary Conille’s appointment as prime minister is ratified by the Haitian senate by 17 votes to 3.