Police were brought in to quell unrest that nearly turned into riots across the United States following the
release of Nike’s new basketball shoe, a retro model of one of the most popular Air Jordans ever made.

The mayhem, including scuffles between customers, stretched from Washington state to Georgia on Friday as huge crowds of shoppers overwhelmed stores. It was reminiscent of the violence that broke out 20 years ago in many cities as the shoes became popular targets for thieves.

The $180 shoes went on sale in a limited release at stores, and the lines began forming several hours before businesses opened.

As the crowds kept growing through the night, they became more unruly and ended in vandalism, violence and arrests. A man was stabbed when a brawl broke out between several people waiting in line at a Jersey City, New Jersey, mall to buy the new shoes, authorities said. The 20-year-old man was expected to recover from his injuries.

In Georgia, officers said they had to break a car window to get two toddlers out after a woman went in after the shoes.

They said she was taken into custody when she returned to the car.

In California, police say crowds waiting to buy the Air Jordan 11 Retro Concords at the Hilltop Mall were turned away after a gunshot rang out around 7am.

No injuries were reported, but police said a 24-year-old suspect was taken into custody. The gun apparently went off inadvertently, the Contra Costa Times reported.

In suburban Seattle, police used pepper spray on about 20 customers who started fighting at the Westfield Southcenter mall. The crowd started gathering at four stores in the mall around midnight and had grown to more than 1,000 people by 4am, when the stores opened, Tukwila Officer Mike Murphy said.

He said it started as fighting and pushing among people in line and escalated over the next hour.

Murphy said no injuries were reported, although some people suffered cuts or scrapes from fights.

Shoppers also broke two doors, and 18-year-old man was arrested for assault after authorities say he punched an officer.

“He did not get his shoes; he went to jail,” Murphy said.

A new edition has been launched each year, and release dates had to be moved to the weekends at some points to keep kids from skipping school to get a pair.

Nike issued a statement in response to the violence that said: “Consumer safety and security is of paramount importance. We encourage anyone wishing to purchase our product to do so in a respectful and safe manner.”

The frenzy over Air Jordans has been dangerous in the past. Some people were mugged or even killed for early versions of the shoe, created by Nike Inc. in 1984.

The Air Jordan has since been a consistent hit with sneaker fans, spawning a subculture of collectors willing to wait hours to buy the latest pair. Some collectors save the shoes for special occasions or never take them out of the box. 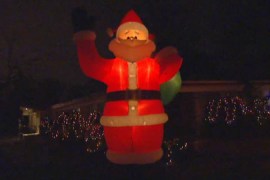 ‘Secret Santas’ spread cheer in US

Anonymous donors help provide the disadvantaged with the means for a happy Christmas.