An earthquake of 5.8 magnitude struck near the New Zealand city of Christchurch, the US Geological Survey said, prompting the evacuation of public buildings.

There was no tsunami warning issued and no immediate reports of serious injuries or widespread damage.

Friday’s quake struck 26km north of Christchurch at a depth of 4km.

“It was incredibly violent,” one caller told Radio New Zealand.

“All the water in my birdbath slopped out and I could hear everything falling over inside. When I walked inside, the cat streaked out the door, ornaments were all over the floor, contents of the pantry were lying on the floor, a little bit of smashed glass and picture frames lying over.”

Christchurch, New Zealand’s third city, is recovering from a quake measuring 6.3 which killed about 180 people in February and caused estimate damate of NZ$15bn ($8.8bn).

Radio New Zealand said malls and office blocks had been evacuated and power had been knocked out in some districts. Goods had been toppled from some store shelves. 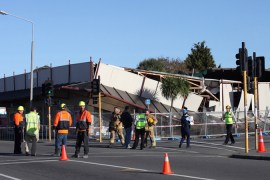