France’s lower house of parliament has approved a bill that would make it a criminal offence to deny genocide, in a move that has caused tension between Paris and Ankara.

The bill has triggered outrage in Turkey as it would include the 1915 mass killing of Armenians in Ottomon Turkey, one of the worst massacres of the 20th century.

There was no official vote count in the ballot in France’s lower house of parliament since lawmakers simply voted by raising their hands.

The bill will next be put to the Senate, or upper house, for debate in 2012, with its backers hoping that it will be adopted before parliament takes a break at the end of February, in the runup to presidential elections.

The Turkish ambassador to France will leave Paris on Friday in protest at the adoption by the French parliamentarians of the bill, an embassy spokesperson said shortly after the vote.

“Efforts of gaining votes using Turkophobia and Islamophobia just to win the presidential elections in France for personal ambitions raises concerns, not only in the name of France, but also in the name of all Europe and universal values of Europe,” Erdogan said.

Erdogan announced the cancelation of all joint military exercises with France, and that the French military will be denied blanket access to Turkey’s airspace and ports. He also promised political and economic sanctions against Turkey’s NATO partner.

The response from Armenia, meanwhile, was overhelmingly positive.

Edward Nalbandian, Armenia’s foreign minister, declared: “Today, by the adoption of the bill criminalising the denial of genocide in the National Assembly, France re-confirmed its high mission of being the cradle of human rights and once again proved its commitment to universal human values. On this occasion I would like to reiterate words of gratitude to the highest authorities of France, the National Assembly and the entire French people.”

Initially, the bill was to criminalise the denial of the mass killings of Armenians in 1915 exclusively, but it was later expanded to include any genocides officially recognised under French law.

The bill would set a punishment of up to one year in prison and a fine of $59,000 for anyone who denied or “outrageously minimised” officially-recognised genocide.

Armenia, backed by many historians and parliaments, says about 1.5 million Christian Armenians were killed in what is now eastern Turkey during World War One in a deliberate policy of genocide ordered by the Ottoman government.

The bill’s author said she was “shocked” at the attempt to interfere with the parliament’s work.

“The attitude of this country [Turkey] which is knocking on the door of Europe and which starts by threatening France of retaliation, when France based its law on the European law, seems to me absolutely paradoxical,” Valerie Boyer, a deputy from the ruling conservative UMP party, said.

Turkey vehemently rejects the term “genocide,” and has campaigned to get France to abandon the legislation, threatening to withdraw its ambassador and cut economic and political ties between the countries.

France formally recognised the mass killings as genocide in 2001. A measure criminalising denial was passed by the French national assembly, the parliament’s lower house, five years ago but blocked by the senate.

The bill, proposed by 40 deputies from Sarkozy’s centre-right party, is expected to pass again through the national assembly, but its fate in the senate is less clear.

Several thousand French residents of Turkish descent gathered outside the parliament to protest before the vote.

Successive Turkish governments and many Turks feel the charge of genocide is a direct insult to their nation, which was founded in 1923 following the collapse of the Ottoman empire.

Turkey disputes the 1.5 million figure and says the mass killings, which began in 1915, occurred during a period of severe conflict and civil unrest, with losses on all sides.

Critics say the bill is a blatant attempt by Sarkozy’s party at winning the votes of 500,000 ethnic Armenians in France before next year’s presidential election. They also say it would limit freedom of speech and is an unnecessary meddling by politicians in a matter that should be left to historians.

French authorities have stressed the importance of bilateral ties with Turkey and the key role it plays in sensitive strategic issues as a member of NATO, in Syria, Afghanistan and elsewhere.

However, bilateral relations have long been strained by Sarkozy’s vocal opposition to Turkey’s bid to join the European Union. 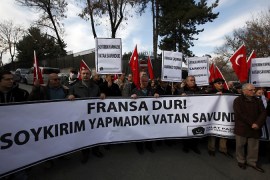 Ankara says adoption of law making it illegal to deny killing of Armenians in World War I will spark crisis.