Nouri al-Maliki, Iraq’s prime minister, has called on authorities in the autonomous Kurdish region to hand over Tariq al-Hashimi, the country’s vice president who is wanted on allegations of running a death squad.

“We call for the government of the Kurdistan region to take its responsibility and hand over Hashimi to the justice system,” Maliki told a news conference in Baghdad on Wednesday. “We do not accept any interference in Iraqi justice.”

Maliki also rejected Hashimi’s calls for Arab League representatives to monitor the investigation and any questioning, telling reporters, “This is a criminal case, and there is no need for the Arab League and the world to have a role in this”.

Officials issued the warrant for Hashimi’s arrest on Monday, after earlier banning him from leaving the country. The accusations date back to the height of the war in 2006 and 2007, when neighbours turned on neighbours and whole sections of Baghdad were divided along sectarian lines.

Hashimi has rejected the charges against him, while the US has urged calm in a row that has raised questions about the stability of the country and reignited sectarian tensions just days after the final withdrawal of US troops.

Joe Biden, the US vice president, who visited Iraq earlier this month ahead of the pullout, said the US was monitoring conditions in Iraq closely and remained committed to a long-term strategic partnership.

The latest intrigue has raised suspicions that Maliki, a Shia, ordered the arrest of the vice president as part of a campaign to consolidate his hold on power.

Kurdish leaders have been trying to work out a solution, sheltering Hashimi from arrest in their semi-autonomous region in northern Iraq.

It is unlikely they will agree to hand over the vice president, said Al Jazeera’s Omar al-Saleh, reporting from the Iraqi capital, Baghdad.

“Kurdish officials in the region said that they will never hand the vice president back to Baghdad because, as things stand now, he is a suspect and he’s not convicted of any crime. And he came in his capacity as vice president of this country, so he is a guest in other words,” our correspondent said.

Bilal Wahab, an analyst on Kurdish politics, told Al Jazeera that the “Kurdish reaction isn’t as well-planned as Maliki’s actions were”, indicating divisions among the main two Kurdish parties.

“[Kurdistan Regional President] Massoud Barzani came out in strong support for VP Hashimi, in contrast with [Iraqi President] Jalal Talabani, who came out … even with comments supportive of Maliki.”

“But even if Maliki is confident, he probably won’t take it to the level of military confrontation with the Kurdish region,” Wahab said. “For Kurds, the challenge is internal unity, because Maliki could reach out to Kurdish opposition parties.”

Speaking at a press conference on Tuesday, Hashimi said: “I swear to God that Hashimi didn’t commit any sin or do anything wrong against any Iraqi either now or in the future and this is my pledge to God.” He spoke from the Kurdish city of Erbil, where he travelled on Sunday after learning that authorities were preparing to arrest him.

On Monday, state-run television aired what it characterised as confessions by men said to be bodyguards for Hashimi.

The men said they killed officials working in the health ministry and foreign ministry as well as Baghdad police officers, and that they received $3,000 from Hashimi for each attack.

Maliki effectively runs the interior ministry, where the charges originated. 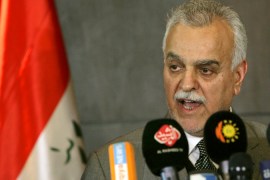 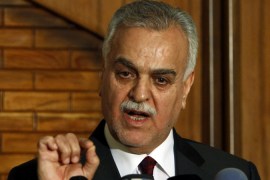 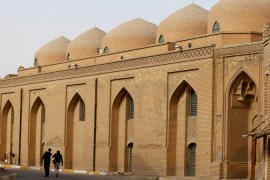