An Argentine government minister has been found hanged in his hotel room in the Uruguayan capital Montevideo during a summit meeting of the South American trade group Mercosur, police said.

“He apparently died by hanging” with a belt, Rondan said. He said police were trying to determine whether it was a suicide, a crime or an accident. A Uruguayan official earlier said that Heyn had committed suicide.

News of his death shocked the Mercosur summit, attended by the presidents of Argentina, Brazil, Paraguay, Uruguay and Venezuela.

Argentine President Cristina Kirchner de Fernandez was informed about the death while she was attending a closed door meeting of the presidents, and was so upset she was seen by her doctor, according to the Uruguayan official.

But Kirchner, who is supposed to assume the presidency of the bloc during the summit, later returned to the meeting with the other presidents.

Security presence was stepped up at the hotel, where some of the leaders attending the summit are staying.

Argentina’s embassy confirmed Heyn’s death, and said in a statement that Uruguayan authorities were taking “all the necessary legal steps with regard to this tragic incident.”

Heyn was a promising economist who belonged to the Peronist youth group La Campora that supports the government of Kirchner and supported the previous administration of her late husband, Nestor Kirchner.

A former leader of the Argentine University Federation, Heyn was an undersecretary in the ministry of the economy during Kirchner’s first term in office. He took up his new post just 10 days ago after Kirchner’s re-election.

A telegenic commentator, he was often featured on state television explaining government policy. 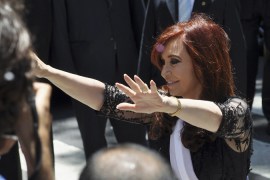