As the United States’ military withdraws from Iraq, it leaves a country transformed by the toppling of Saddam Hussein but also by the occupation and the bitter sectarian fighting that followed.

Millions of Iraqis are still living in exile outside the country and inside: hundreds of thousands of people displaced from their homes still cannot go back. More than 150,000 of them are living in temporary government housing. 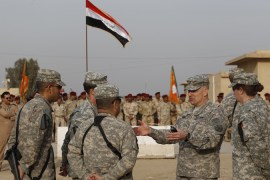