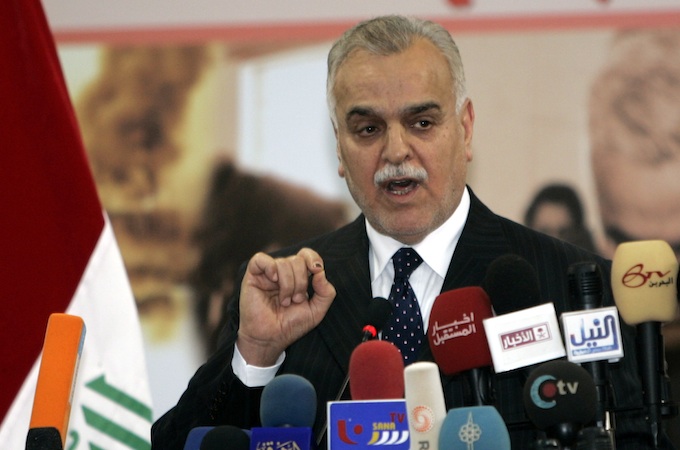 Tariq al-Hashimi, the vice-president, is reportedly facing an arrest warrant over allegations of involvement with a bombing [EPA]

Baghdad, Iraq – The last US troops withdrew from Iraq this morning, but the story has barely merited a mention on Iraqi television; local media are instead focused on a deepening political crisis, which includes – among other issues – an arrest warrant for the vice-president.

Meanwhile, the Iraqi interior ministry has reportedly issued an arrest warrant for Vice-President Tariq al-Hashimi. Several of his security guards have been under investigation over a bombing last month in the green zone, the heavily-fortified district in central Baghdad that houses senior politicians and foreign embassies.

The bomb was assembled inside the green zone, according to Iraqi security officials, but went off prematurely. Both Maliki and Osama al-Nujaifi, the parliament speaker, have claimed to be the intended target.

The interior ministry was supposed to release details of its investigation in a press conference on Saturday night; the ministry said it would announce that Iraqi politicians, presumably referring to Hashimi, were linked to the bombing.

But officials from the ministry announced late on Saturday that they were postponing the press conference because of a request from the judiciary.

‘We can no longer remain silent’

Both Mutlaq and Hashimi are members of the secular Iraqiya bloc, which with 91 MPs is the largest individual bloc in the Iraqi parliament. The coalition, which is cross-sectarian but largely Sunni, has been in a power-sharing deal with Maliki’s predominantly Shia State of Law alliance.

Now it seems in danger of collapsing: Iraqiya announced on Friday night that it was suspending participation in parliament.

“We can no longer remain silent about the way the state is being administered, as it is plunging the country into the unknown,” it said in a statement.

Members of the bloc complain that the power-sharing deal has proved to be mostly symbolic. Maliki still controls the country’s security ministries: The posts of defence minister and interior minister have been vacant for more than a year, and Maliki appointed himself to fill both jobs on an acting basis.

Mutlaq and Hashmi have both also recently criticised Maliki, part of a growing chorus of politicians and analysts who accuse the prime minister of consolidating too much power. Mutlaq warned in a television interview earlier this week that Maliki was trying to create a “new dictatorship” in Iraq.

“Partnership has not been achieved,” he said of the power-sharing deal.

Sunni politicians are also angry over a recent campaign of arrests against alleged former members of Saddam Hussein’s Baath party. The arrests – more than 600 over the last two months – were ordered by Maliki.

Mutlaq was caught up in a previous campaign against alleged Baathists. He was among the most prominent politicians targeted last year by the Justice and Accountability Commission, a body established to block former members of the Baath party from running for office. (The decision was later reversed, and Mutlaq was allowed to run.)

Many Sunnis viewed the Shia-led commission as a political tool intended to block Sunni politicians from winning seats in parliament.