Sixty-seven people were on the Kolskaya oil rig platform when the accident occurred on Sunday as the platform was being towed from the eastern Kamchatka peninsula towards the island of Sakhalin.

Forty-nine of those onboard have been missing since the incident.

“The portholes were damaged by ice and waves, and water began going into the vessel,” a regional emergency ministry spokesman told the AFP news agency.

“Four people in wetsuits were located in the water without any signs of life” but rescuers were unable to pull them out because of the poor weather conditions, the agency said in a statement.

The crew was waiting to be evacuated by helicopter but the platform turned over and sank before they could board their rescue rafts, he said.

Emergency workers rescued 14 people who were reported to be in serious condition. However, rescue efforts were complicated by high winds and waves up to four metres high.

“The investigation’s main suspected reason for the accident was a violation of safety regulations by transporting the platform with no account for weather conditions, as there was a strong storm in the area,” the Russian Investigative Committee said in a statement.

Al Jazeera’s Neave Barker, reporting from the Russian capital, Moscow, said that the inclement weather conditions have projected a bleak outcome for those who went missing after the accident.

“So it looks like the odds are very much stacked against the rescue operation,” he said.

“Two helicopters that were sent have now returned back to base because the weather conditions were just too bad for them to continue their search mission.”

The Kolskaya rig was engaged in shelf exploration in western Kamchatka peninsula for Gazflot company, a subsidiary of Russia’s gas monopoly Gazprom. But it appeared that the vessel had not been doing drilling work, so no oil spill was likely.

Elsewhere, a Russian fishing vessel stranded in icy Antarctic waters remained in a “precarious position” on Sunday, two days after it was struck by an iceberg, New Zealand rescuers said.

The crew of the Russian-flagged Sparta had a scare overnight when temporary patches placed over the damaged section of hull failed and the boat began taking on water again.

But several hours later they reported they again had the situation under control.

The Sparta, with a crew of 32, sent out a distress call early on Friday from near the Antarctic ice shelf after it struck underwater ice, tearing a hole below the water line, Al Jazeera’s Roza Kazan reported.

It will be several days before rescue ships can make their way through heavy sea ice to reach the vessel about 3,704km southeast of New Zealand.

However, a New Zealand Air Force plane was able to fly over the Sparta late on Saturday and drop off extra pumping equipment and fuel. 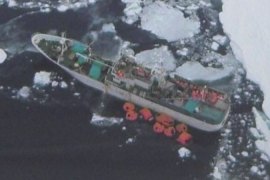 Holed by an iceberg, Sparta’s crew struggles to keep situation under control as they wait for rescue ships. 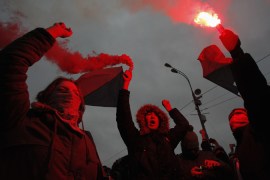 A look at Russia’s unrest and the media; plus, why a reality show about Muslims in the US has sparked major debate.