Christopher Hitchens, the controversial British author and journalist and the scourge of public figures from Henry Kissinger to Mother Teresa, has died at the age of 62.

Hitchens, who had long been based in the US, was diagnosed with throat cancer in 2010 and died as a result of pneumonia, a complication caused by the disease, in a Texas hospital late on Thursday.

His death was announced by Vanity Fair, the magazine where Hitchens was a contributing editor and for whom he had written for almost two decades.

“There will never be another like Christopher. A man of ferocious intellect, who was as vibrant on the page as he was at the bar,” said Vanity Fair editor Graydon Carter.

“Those who read him felt they knew him, and those who knew him were profoundly fortunate souls.”

Hitchens, whose career lasted over four decades, was a regular contributor to US publications such as The Atlantic, Slate, World Affairs, and The Nation.

In recent years, he was known for his strong position on atheism, being one of the advocates of the “new atheism” movement.

HItchens also chronicled his struggle with cancer as he underwent bouts of chemotherapy treatment.

In a memorium written by Julie Weiner on the Vanity Fair website, she quoted Hitchens’ own work regarding the battle he faced against cancer.

“Cancer victimhood contains a permanent temptation to be self-centred and even solipsistic,” Hitchens wrote nearly a year ago in Vanity Fair.

“But his own final labours were anything but,” she wrote.

In a colourful and always provocative career, HItchens engaged in verbal and occasional physical battles on behalf of causes on the left and right, and wrote the provocative best-seller “God is Not Great” in 2007 in which he made an impassioned and uncompromising case for atheism.

Even after his diagnosis, which forced him to cancel a tour of his memoir “Hitch-22”, his columns appeared weekly, ranging savagings of the British royal family to reveling in the death of Osama bin Laden.

He was an acknowledged contrarian, coming from a half-Christian, half-Jewish background, yet being fully non-believing. Once fiercely left-wing, he later backed the Iraq war and voiced support for George W Bush, the former US president.

He advocated intervention in Bosnia and the overthrow of Saddam Hussein in Iraq yet once submitted to waterboarding to prove that it was indeed torture.

Public figures to draw his ire ranged from Henry Kissinger and Mother Teresa to Bill Clinton, Kim Jong Il and Prince Charles, the heir to the British throne.

“We have known for a long time that Prince Charles’ empty sails are so rigged as to be swelled by any passing waft or breeze of crankiness and cant,” Hitchens wrote in 2010 after the UK royal had given a speech criticising Galileo for the scientist’s focus on “the material aspect of reality.”

Radicalised by the 1960s, Hitchens was often arrested at political rallies, was kicked out of Britain’s Labour Party over his opposition to the Vietnam War and became a correspondent for the radical magazine International Socialism.

His reputation broadened in the 1970s through his writings for the UK’s New Statesman magazine.

No Democrat angered him more than Clinton, whose presidency led to the bitter end of Hitchens’ friendship with White House aide Sidney Blumenthal and other Clinton backers.

As Hitchens wrote in his memoir, he found Clinton “hateful in his behaviour to women, pathological as a liar, and deeply suspect when it came to money in politics.”

From Left to Right

Hitchens fell out with many former friends on the left following the attacks of September 11, 2001, in New York and Washington.

He fought with Gore Vidal, Noam Chomsky and others who either suggested that US foreign policy had helped cause the attacks or that the Bush administration had advanced knowledge.

He supported the Iraq war, quit the left-wing The Nation, backed Bush for re-election in 2004 and repeatedly chastised those whom he believed worried unduly about the feelings of Muslims.

“It’s not enough that faith claims to be the solution to all problems,” he wrote in 2009 after a Danish newspaper apologised for publishing cartoons of the Prophet Muhammad that led Muslim organisations to threaten legal action.

“It is now demanded that such a preposterous claim be made immune from any inquiry, any critique, and any ridicule.” 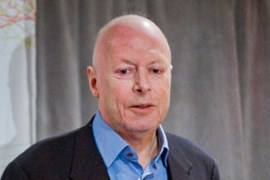 Christopher Hitchens: A life in quotes

Scourge of US presidents and religion, defender of Iraq war and Palestinian cause, Hitchens never ducked an argument.