One of two politicians caught in a power struggle for control of Papua New Guinea’s government has told Al Jazeera that he has the support of the country’s parliament.

The comments by Peter O’Neill on Friday come amid a continuing standoff after Papua New Guinea’s governor-general and supreme court earlier this week backed his rival, Michael Somare, as the Pacific nation’s legitimate leader.

“We have a parliament who mandated a prime minister, and the courts should respect that,” O’Neill told Al Jazeera’s Andrew Thomas. “Prime Ministers are chosen by parliaments, not governor-generals.”

Governor-General Michael Ogio reinstated 76-year-old Somare as prime minister on Monday after the court ruled that his removal from office by O’Neill in a parliamentary vote in August while he was getting medical treatment outside the country was unconstitutional.

O’Neill has rejected Somare’s reinstatement and parliamentarians have passed retroactive legislation recognising him as leader.

The political power struggle has brought heavily armed police onto the streets to guard state institutions with rival police commissioners appointed by each leader agreeing that the force should remain neutral.

“This is a political situation, this is not a police situation,” said Tom Kulunga, the police commissioner appointed by Somare.

Somare said he did not need to be sworn in, because the supreme court had already reinstated him as prime minister.

But a majority of the country’s 109 legislators voted later on Wednesday to suspend Ogio and replace him temporarily with Jeffery Nape, the speaker, who then swore O’Neill in as prime minister. 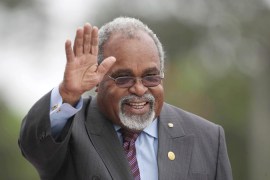