A Paris court has convicted a Venezuelan-born man known as “Carlos the Jackal” of organising four deadly attacks in France in the 1980s and sentenced him to life in prison again.

Ilich Ramirez Sanchez, a self-proclaimed revolutionary who is already serving a life sentence in a French prison for a triple murder in 1975, returned to court last month to face charges he instigated attacks in France in 1982 and 1983.

Ramirez, 62, was accused of masterminding four separate attacks on two trains, a train station, and a Paris street that killed 11 people and wounded nearly 200.

The court on Thursday found him guilty on all four counts, and sentenced him to life in prison with possibility of parole after 18 years.

Prosecutors said the bombings were his answer to the police seizure of two of his gang, including his lover, and argued that he remained a danger to the public.

Ramirez denied any role in the attacks. Defence lawyers called the decision a scandal and said their client would file an appeal.

Ramirez spoke for five hours in his final testimony.

“I am a living archive. Most of the people of my level are dead,” he said.

At the end, he read a text in memory of longtime Libyan leader Muammar Gaddafi.

“This man did more than all the revolutionaries,” Ramirez said, sobs choking his voice as he ended the monologue with, “Long live the revolution!”

The flamboyant Venezuelan sowed fear across Western European and Middle Eastern capitals during the Cold War, with believed links to hijackings and bombings for far-left and Palestinian groups.

He was best known for the bloody hostage-taking of OPEC oil ministers in 1975. He staged attacks throughout Europe for more than two decades before being captured in Sudan in 1994.

Venezuelan President Hugo Chavez said he sought to ensure that Ramirez’s rights were respected during his trial in France. Chavez has previously praised Ramirez as a “revolutionary fighter” and has said he does not view him as a terrorist.

Three others were tried in absentia. The court convicted two of his accomplices, Palestinian Kamal al-Issawi and German Johannes Weinrich, giving them life sentences, and acquitted a third, Christa Margot Frohlich.

Weinrich, said to head Ramirez’ European operations and a former member of Germany’s violent far-left Red Army Faction, is behind bars in Germany.

Frohlich remains at large, and al-Issawi’s whereabouts are unknown to French authorities. 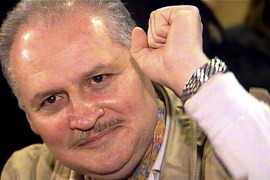 Carlos the Jackal back on trial in Paris