Day labourers and other poor workers in the village of Sangrampur, about 30km south of Kolkata, began falling ill late on Tuesday after drinking the bootleg brew, according to district magistrate Narayan Swarup Nigam.

Local officials said the death toll could rise as about 100 people were being treated in hospital.

Police have arrested 10 people in connection with making and distributing the methanol-spiked liquid, which is also used as a fuel, solvent and anti-freeze.

Al Jazeera’s Prerna Suri, reporting from New Delhi said: “Most of the people can’t afford good quality alcohol so they buy cheap version, which are often laced with methanol to make them potent. Bootleg alcohol is very common, thousands die of alcohol poisoning across India every year.”

“This particular case actually happened in rural India in West Bengal state and most of the medical facilities there aren’t really capable of handling or coping with such large numbers of people falling ill. So we have seen a large number of people being treated on the floors, and for many of them it was too late by the time they reached other larger hospitals,” our correspondent said.

A similar incident in the state of Gujarat killed 112 people in 2009 and in 1992, more than 200 people died in Orissa from drinking tainted alcohol.

Last week, Gujarat brought in a new law making the illegal manufacture and sale of toxic alcohol there, punishable by death.

Mamata Banerjee, the chief minister of the state of West Bengal, has promised a crackdown on toxic alcohol.

“I want to take strong action against those manufacturing and selling illegal liquor,” he said.

Our correspondent said: “Although India does have strict laws banning the sale of illegal alcohol, on the ground it is very difficult to monitor and implement.

“This locally brewed alcohol known by various local names is a popular poor man’s drink. It is manufactured and produced in people’s homes, also in large industrial units. So monitoring and supervising the safety standards in these units is quite difficult.

“There is also the other issue of corruption in India. In most of the cases we have seen that local officials, including the police, are also involved in protecting these suppliers or bootleggers who have been selling to local residents,” she added.

Commonly called cholai or country-made alcohol in India, the drink costs as little as 10 rupees (20 US cents) and is often spiked with methyl alcohol and industrial spirits. 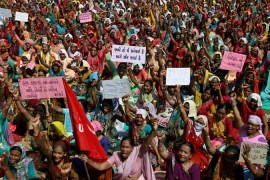 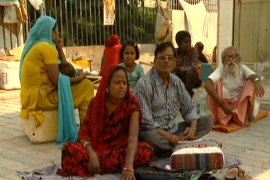