Papua New Guinea’s deposed prime minister has been reinstated by the country’s governor-general in an effort to resolve a months-long deadlock which sees two men claiming the top political job.

O’Neill, who toppled Somare in August while he was overseas for heart treatment in Singapore, refused to accept that ruling, saying he was legitmately elected by parliament.

“As parliament spoke today I am the prime minister of this country and Somare is trying to hijack it with some hooligan policemen,” O’Neill said on Tuesday night after barging through a police barricade to see the governor-general.

The crisis has prompted fears of unrest on the streets of the capital Port Moresby with police appealing for calm.

In a statement in the capital Port Moresby, Somare said he expected his swearing in to defuse the crisis and was confident that “common sense will prevail”.

“We will be facing the general elections soon and people of Papua New Guinea can then play their role in electing members of parliament that will once again represent their interests in Parliament,” said Somare.

Papua New Guinea has a turbulent political history, which has seen governments in the past toppled as legislators change party allegiances frequently.

The situation has prompted international concern, with Kevin Rudd, the Australian foreign minister, calling it “unknown terrain” for Papua New Guinea. “We don’t want to see blood on the streets,” he said.

Ban Ki-moon, the UN secretary-general, also called for a peaceful resolution to the crisis.

“He calls on all sides to exercise maximum restraint and to avoid an escalation of the situation,” his spokesman said. 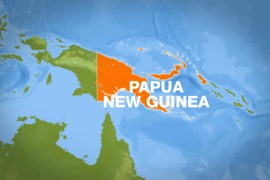 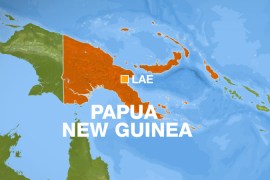 A 6.7 magnitude quake rattles Papua New Guinea’s second town, but no tsunami warning has been issued.

Fatalities feared as aircraft carrying 32 people goes down while flying between towns of Lae and Madang.